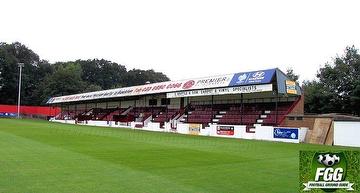 Angels make the relatively short journey to Park View Road for a Bank Holiday Derby match against Welling Utd in Vanarama National South.  There’s no time to feel sorry for themselves following Saturday’s reverse against Havant & Waterlooville as the players need to prepare mentally and physically for what will be another challenging encounter.

The Wings currently stand in 13th position in the fledgling National South Table having won 2, drawn 2 and lost 2 so far this season.  This includes a very creditable 1-1 draw at Chelmsford on Bank Holiday Saturday, a place where it’s always difficult to come away with anything.

Despite the close geographical proximity between the two clubs, meetings have been relatively sparse over the years due to the fact that much of Welling’s record shows them to have been a Conference club.

Our last League encounters came in season 2012/13 when at Longmead the two sides played out a 1-1 draw on Saturday 25th August with Frannie Collin scoring with a penalty in the 57th minute.  By the time of the reverse fixture at Park View Road on Tuesday 12th March, the Wings were well on the way to the Conference South title and inflicted a comprehensive 4-1 win. Once again it was that man Frannie Collin who netted the consolation for the Angels in the 49th minute.

We were to meet once again at Park View Road competitively during Steve McKimm’s first season in charge when on Tuesday 14th October 2014 on a very wet evening Angels inflicted a 3-1 win on a youthful Wings side in the Kent Senior Cup 1st Round. Scorers for Tonbridge were Billy Medlock in the 20th and 41st minutes with Tom Parkinson adding a third in the 45th minute.

Founded in 1963 as a youth side playing on park pitches, Welling Utd made steady progress through the Spartan, Athenian and Southern Leagues before claiming a place at the Football conference where they were to enjoy 14 seasons before relegation back to the Southern League.  A place in the newly formed Conference South was then achieved, and despite a winding up order two seasons previous, in 2011/12 as previously mentioned they won the title and were promoted back to step 1 of the non-league football pyramid.  It was however to be a relatively short stay as in 2015/16 they were relegated back to National South.