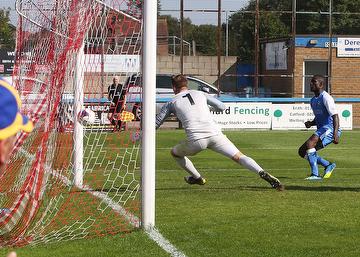 In many ways there were some similarities between this defeat and the one against Havant & Waterlooville just 48 hours previously.  The Angels found themselves once again 3-1 down at the break and at this level of football that means you have a mountain to climb to get back into the game let alone actually take something away.

On 27 minutes Sonny Miles gave the ball away when not under pressure with Bradley Goldberg taking full advantage.  Goldberg was again able to profit in the 35th minute when Angels lost the ball carelessly on the right flank and Welling were 2-0 up.

The visitors were seemingly right back in the game on 43 minutes when a Joe Turner free kick was headed home by Ade Yusuff, the first time this season a striker had scored for Tonbridge.

Frustratingly for the vocal away support Welling regained the two goal advantage just five minutes later in first half stoppage time when Gavin McCallum was allowed to head home all too easily at the back post following a Wings free kick.

When Anthony Cook scored Welling’s fourth goal in the 64th minute following a James Folkes error it looked like it could get embarrassing for Tonbridge but following some substitutions the team in blue rallied and arguably were slightly the stronger side for the remainder of the game.  They also managed to pull a goal back through the hard working and impressive D’Sean Theobalds in the 83rd minute but they needed another to possibly create a grandstand finish.  It didn’t  come and they were left to rue those defensive lapses.