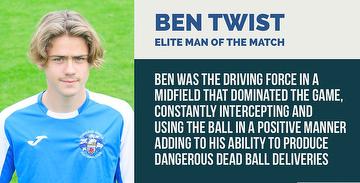 Tonbridge Angels Academy maintained their 100% record with a 5-3 victory against Crystal Palace Community but manager Tommy Parkinson was less than impressed with his side’s last 15 minutes when the foot came off the pedal whilst 4-1 up.

Parkinson explained after the game that his side had, too often this season, played in patches and they need to learn to be consistent both as a team and individually over the full 90 minutes.

Despite this, for 75 minutes, the Angels’ youngsters dominated the game and were, ultimately, well deserving of their fourth straight win in the National Academies’ Alliance.

Tonbridge went in front after eight minutes  when a ball pumped into the box brought a misjudgment from the Palace goalkeeper who called for a ball that he had no chance of collecting. Ned Lewis was first to the ball and his header was looped over the advancing Mason Whitnall and into the unguarded net.

On a narrow pitch at Catford Wanderers, Sam Babayale’s long throws into the box were causing chaos in the Palace defence with one throw managing to find its way through to striking the far post.

Harry Hudson headed wide from a Babayale throw before, after 23 minutes, an exquisitely curled shot into the top corner from Lewis doubled the Angels advantage.

With Crystal Palace barely threatening, Tonbridge had further opportunities to extend their lead. Lewis headed over from the umpteenth Babayale throw and Louis Copeland shot into the side netting before the home side surprisingly pulled a goal back after 35 minutes when their burly striker, Nathan Medley, scored with a shot into the top corner from 20 yards.

Tonbridge’s dominance was restored at the start of the second half when Saul Musengeyi’s shot-cum-pass found Copeland at the far post to net from a tight angle.

The Angels put the game virtually out of reach of their hosts after 56 minutes when a free kick lofted into the box by the excellent Ben Twist was met with a header from Hudson to make it 4-1.

Lewis narrowly shot wide and Hudson headed a Babayale free kick wide before, after 76 minutes, Medley once more showed the quality of his left foot with a shot from which Angels’ goalkeeper, Charlie Martin, might well have done better.

Whilst he bemoaned his side’s final quarter-hour, Parkinson praised his side’s earlier performance when they “had some spells with good quality, scoring some nice goals”. The Angels maintain their position at the head of the table alongside Welling United who also have four wins out of four.