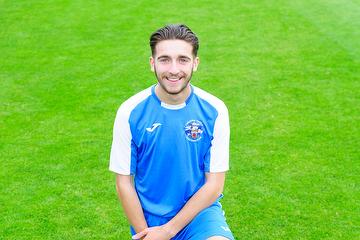 Copeland is a super sub!

Two goals from substitute Louie Copeland in the last five minutes gave the Academy a hugely exciting comeback win against a Dulwich Hamlet side that would have returned home feeling a little robbed.

Dulwich showed from the outset that they would prove to be a stern test for the Angels who had entered the game with a 100% record.

In a first half of very few chances, Dulwich just about shaded it with goalkeeper, Charlie Martin saving from Leon Thomas on a couple of occasions whilst Saul Musengeyi stretched the Dulwich keeper, Luke Godwin on just the one occasion.

As the grey skies turned to heavy rain, the game found an extra zip in the second half. Dulwich had two great opportunities to open the scoring in the opening five minutes with a substitute heading over and after a defensive mistake, Martin came to the rescue to deny Darragh Okie-Tutu.

Further chances were to fall Dulwich’s way and it was no surprise when they took the lead on 64 minutes through Yaya Aly, who picked his spot in the bottom corner having found plenty of time and space on the right sided angle of the box.

It did, however, spark a response from the Angels and when Exause Bizima sent Copeland clear the substitute’s shot came back off the crossbar.

With 10 minutes remaining a free kick from Ben Twist was turned away for a corner, from which Harry Hudson’s header was brilliantly touched over the bar by Godwin.

Five minutes remained when a ball was won on the right side and the ricochet sent Copeland clear to cut in and from just inside the box he directed a shot into the far corner giving the goalkeeper no chance.

Copeland’s pace was destroying the Hamlet back line and he was involved as a cross begged a touch but eluded everyone.

But, with two minutes remaining, Copeland produced a magical moment when he curled a shot into the top corner from around 25 yards before being engulfed by joyous team mates.

Tom Parkinson admitted after the game that Dulwich were much the better side for long periods in the game. “We were not at our best today, but have shown great character and resilience to come from behind to win the game.”