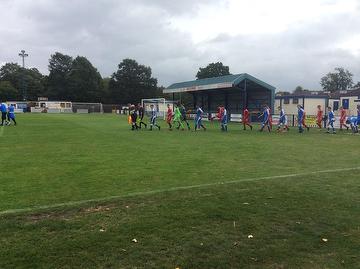 The score line says all you need to know about this game. Perhaps the only surprise was that the home side were only one up at the break having missed a number of chances during the first half.

Angels were ahead as early as the 11th minute through Jacob Lambert. Even at this early stage it was obvious that the home side were stronger in the tackle and possessed the players who were more technically astute than their opponents. The early goal scorer Lambert together with Harry Hudson, and Ned Lewis were the stand out players for Tonbridge but there were no weak links in this side. Prepared to do the ugly stuff when they had to their running off the ball and accurate passing was all too much for a bewildered Ebbsfleet.

Perhaps they should have looked after the ball a little more carefully when presented with chances and if they had done so the final score would have been even more embarrassing for Ebbsfleet.

The second half saw the floodgates open for the Angels attack. There were goals for Louis Copeland, Hudson (3), and Saul Musengey (2).  Angels could even afford to hit the bar early in the second half and have a goal ruled out for offside.  What was impressive also was that on the few occasions the Fleet did manage to get forward both Tonbridge goalkeeper and back four looked to be well in control.

Afterwards, a delighted Academy Manager, Tommy Parkinson said: “The boys did really well today and carried out the things we’ve talked about and carried out in training.  If we had taken a few more chances it would easily have reached double figures.  We’re looking forward to our FA Youth cup tie here next week and hopefully some of the regular Angels supporters will come down to cheer us on.”