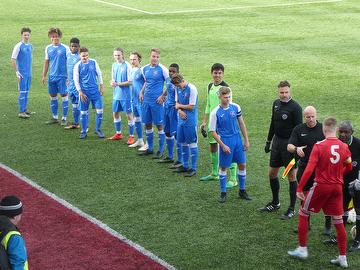 Angels maintain position at head of the table

Tonbridge Angels’ Academy maintained their three point lead at the top of the National League Under-19 Alliance when a penalty, two minutes from time, sealed victory at Worthing.

At a bitterly cold Woodside Road, two unbeaten sides went head-to-head and produced a game that successful distracted attention away from Jack Frost nibbling at the toes.

The Angels began the first half on the front foot and their ascendancy was to last throughout the opening 45 minutes. Two early free kicks from Ben Twist saw one blocked and the second headed over by Harry Hudson. Ned Lewis brought saves from the home goalkeeper and it was fully 20 minutes before Worthing mounted an attack of any substance bringing comfortable saves from Charlie Martin.

Two efforts in two minutes from Lewis narrowly went the wrong side of the right hand post before, after 28 minutes, Lewis linked with Saul Musengeyi before giving himself a touch to line-up a shot into the top corner from 20 yards.

Tonbridge’s domination of the first half should have brought greater rewards but chances came and went, including a thrilling run from Sam Babayale that parted the Worthing back line but the full back dragged his shot wide.

The time in the dressing room brought a shift in momentum with the home side working hard to get themselves back into the game. A header in the first minute was comfortable for Martin but, after 58 minutes, he could only watch on as a great chance went begging with a shot screwed wide.

But the reprieve was only to last a minute when an uncharacteristic error from captain Hudson saw him robbed as he tried to shepherd the ball over the bye-line by Jack Merrydrew whose shot found the bottom corner.

The goal was the wake-up call with the Angels regaining the upper hand. From a Babayale corner, Harrison Mayhew headed at the goalkeeper, who similarly saved from Lewis a minute later.

Manager Tom Parkinson made three substitutions bringing Aiden Murphy and Louis Copeland into the attack and Regan Bowden slotting in at full back allowing Leo Deere to move forward.

After 76 minutes, Twist won a ball in midfield, drove into the box but unfortunately his finish was straight at the goalkeeper.

A series of corners brought some desperate defending from Worthing which included a shot from Copeland that just cleared the bar.

With two minutes remaining, another corner saw Babayale wrestled to the ground by a Worthing defender, as they both rose the Worthing player put his hand to the face of of the Tonbridge player who went back down. The referee was well placed to view the incident and immediately pointed to the spot, brandishing a yellow card to the home offender.

Lewis successfully converted the penalty, leaving the visitors to see out the remaining minutes without alarm.

Parkinson commented after the game that: “it was a good result against a very good footballing Worthing team but it should have been a lot more comfortable with a lot of chances missed, especially in the first half. But a much better performance than last week and six wins from six.”