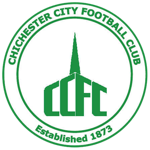 This evening (13th October), Angels travel to Chichester City of the Pitching In Isthmian South East for a place in the 4th qualifying round of the Emirates FA Cup.  Chi may play their league football two levels below Tonbridge but as everyone knows that doesn't always count for much in the world's oldest football knock out competition.  Add to that Chichester's recent FA Cup form and there is no doubt that the Angels will need to raise their game following the disappointing 2-0 home defeat by Hungerford Town in National South last Saturday.

Please remember that our supporters are not allowed to attend this game following one of the strangest and arguably unfair rulings from the FA we can ever recall.  We must therefore ask you all not to purchase tickets on line or travel to the stadium as you will not be allowed to enter.  We will of course bring you live updates on the progress of the match via our Twitter feed @tonbridgeangels

Chichester City can trace its history as far back as 1873. In 1896 they became members of the West Sussex League and in 1920 they joined the Sussex County League, a competition they were to grace until 2019 although by then it had been renamed the Southern Combination.    It was in the FA Cup however that they really made the recent headlines(2019/20) battling through six rounds of qualifying to make the 1st round proper and then receiving a bye to the 2nd round making them the lowest ranked club left in the competition.

In the league this season their fortunes have been mixed with one win and three defeats. They currently lie in 17th out of 19 in the table, but its in the FA cup their form appears to lie having safely negotiated three rounds.