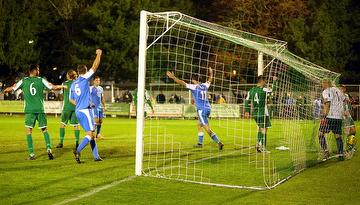 One always dreams of a relatively easy passage through an FA Cup match but in truth it rarely works out like that.  And so it proved at Oaklands Park, home of Chichester City, where the hosts pushed Angels all the way in a typical frenzied tie.  At times the game may have lacked quality, but never excitement, as the 420 spectators at the sell out match could never afford to take their eyes away from the action.

As Angels Boss, Steve Mckimm said afterwards: "We knew it wouldn't be easy, we had them watched twice so we were aware of what they would be about but the fact is we're through, a number of our fellow National South sides aren't and I'll take that all night long.  Credit Chichester for giving us a really tough game, but also credit my lads for giving it their all. They have had to work their socks off tonight."

It was a fairly comfortable if cagey start for the Angels and although there were a couple of early defensive scares for the team in blue, they took the lead in the 24th minute with a Route 1 goal.  A huge clearance was slightly misjudged by a Chi defender and there was the energetic Joe Turner anticipating the half chance and with the home keeper committed the ball rolled gently into the net.

Could Angels just simply build on the good start? Not a bit of it.  In typical FA Cup fashion the so called underdogs came storming back and were level within five minutes.  An attack down the right flank that left Kristian Campbell stranded, he was already on a yellow card, saw the ball crossed over for Kaleem Haitham to thump home and send the crowd behind the goal into raptures believing perhaps their team could repeat their Cup heroics of last season.

The game settled into a relatively even pattern which was praise to Chichester as it would have been difficult to determine which of the two sides played their league football two levels higher.  The visitors were unable to really get their passing game together and had to rely on stubborn defending to get them to half time on level terms.

With nothing to lose the home side came out in fighting mood and Tonbridge had to keep their concentration in order to maintain their toe hold on the game.  Not that they didn't have chances of their own. Turner and Da Costa both managed to warm the hands of Chichester keeper Steven Mowthorpe before the visitors took the lead again on 65 minutes.  A Da Costa corner it seemed had been hit much too near the goal to cause any real danger but Turner was once again quickest to react and managed to force the ball over the line.

That goal was the signal for Chichester to throw caution to the wind and build some incisive attacks that resulted in three guilt edged chances and on another day one of those at least should have been taken.  The entire Tonbridge team were defending as if their lives depended on it with Angels keeper James Shaw called into action with a couple of smart saves.   As the clock ran down, and with Angels substitute Javaun Splatt now bringing pace up front to the channels the Chichester threat slightly subsided although Mowthorpe did join his colleagues up front for a corner in those last desperate minutes.

A mixture of joy and relief spread through the Tonbridge players as referee James Robinson, who had a good game, finally brought the curtain down on a typical FA Cup tie and the Kent side were in the hat for the 4th qualifying round.    The draw will take place on Thursday 15th October at 1:00pm and will be broadcast live on Talk Sport 2.