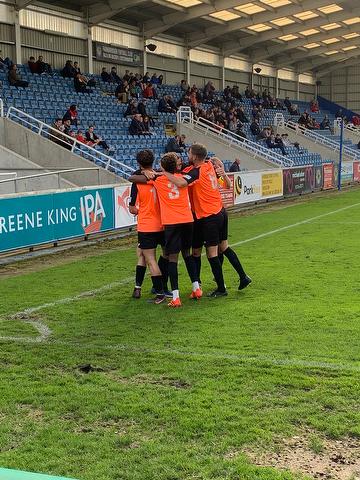 Angels in hat for 3rd Qualifying Round

Tonbridge have earned themselves a place in the 3rd qualifying round of the FA Cup with a performance that was based around a strong defensive unit that in reality involved the entire team.  Such was the quality of the defensive performance that Farnborough really only tested James Shaw in for the injured Jonny Henly just the once and that was the problem for the home side.   From an Angels perspective you do need your strikers to be in the right place at the right time and so step forward Tom Derry whose 66th minute strike was to prove decisive.

It was a strong performance from the home side in the first 25 minutes with good chances for Seth Owens and Andrew Sealey-Harris with James Shaw preserving the stalemate with a parried point blank save in the 25th minute from a Farnborough corner.

It wasn’t all  about the home side however with chances for Rian Bray Javaun Splatt and Da Costa.

In the 40th minute a wonderful free kick from Angels substitute Ben Greenhalgh should have seen his side take the lead but the quality of the kick was such that not a single player could quite make a connection.

With half time it would be a slightly relieved Angels who reached the sanctuary of the dressing room with their goal still intact and Farnborough frustrated that they hadn’t at least gained a slender advantage.

On 51 minutes Kristian Campbell was in with a chance but the angle was too tight and 12 minutes later the pick of the Farnborough players, Sealey-Harris was again causing problems for the Tonbridge defence this time at the expense of a corner.

Angels took the lead on 66 minutes. A Ben Greenhalgh  corner appeared to have been overhit but Joe Turner somehow managed to head the ball back across goal and there was Tom Derry to bundle the ball home past the helpless Liam Beach.

There was yet another chance for Sealey-Harris on 70 minutes to remind us all that his team were still very much in this cup tie and on 81 minutes he was put through but Angels keeper Shaw was quickly off his line to avert the danger.

A minute later Javaun Splatt was through on goal with the ball at his feet but Beach claimed the ball and the chance to make the tie safe for the Angels was gone.

With the minutes ticking by, Farnborough were forced to push forward which meant gaps in the home defence. With three minutes left Turner unleashed a shot which crashed against the crossbar.

The final few minutes saw Tonbridge see the game out in relative comfort, the truth being that by now Farnborough had rather run out of ideas on how to break down the uncompromising Angels defence.

Afterwards, Angels Boss Steve McKimm said: “Farnborough made it very difficult for us and we had to work really hard for this win.  Overall it wasn’t the greatest performance but this is our first competitive game since March and it could be around three weeks until we really get playing the way I know we can.  The objective today was simply to get through to the next round and that’s what we’ve done.”