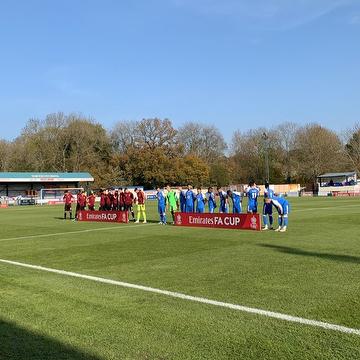 Bradford City gave the Angels a lesson in controlled possession football as they ran out seven goal winners with no reply from the Angels.   To their credit the hosts did produce half chances but they weren’t able to finish them off and with the third Bantams goal coming on the stroke of half time there was always going to be a mountain to climb for the home side.

The setting couldn’t have been better. A glorious November day, a perfect pitch and The Halcyon Wealth Longmead Stadium looking spick and span  for the Angels first appearance in the Emirates FA Cup 1st Round Proper since 1972.  It was just such a shame that the supporters couldn’t have been part of this memorable occasion. The fact that EFL side Bradford City were the opponents added very much to the occasion.

Angels Boss, Steve McKimm went with the starting line up he used so successfully in the previous round against Taunton Town which meant a place on the bench for regulars Rian Bray and Khale Da Costa.

The men in blue shirts should not be too downcast with that rather emphatic scoreline against them.   All the players without exception gave their all; they were simply outplayed for parts of the game by a full time EFL club.

Bradford City were the first to show and their early dominance was to prove fruitful with an opening goal to the visitors through Anthony O’Connor who was presented with a free header after just six minutes.  The game territorially evened out after that but it was Bradford who went further ahead in the 14th minute from a direct free kick just outside the area well executed by Billy Clarke.

Most of the chances were continuing to fall Bradford’s way but gradually Angels were starting to get something of a foothold in the game with half chances falling to the lively Alex Akrofi and Jack Parter providing a wonderful dipping effort that was just over the bar.

That last 20 minutes of the first period was a good spell for Tonbridge but the referee ignoring appeals for a possible foul on Akrofi, the Bantams went through and scored on 44 minutes through Clarke. It was a bitter blow for the hosts as that third goal probably meant that victory for them was not possible with damage limitation being the aim for the second period.

Reinvigorated, by the half time cuppa, Angels started brightly with Tommy Wood forcing a good save from Richard O’Donnell in the visitors goal, but it wasn’t long before a 4th Bradford goal arrived in the 55th minute through Clayton Donaldson.

For Tonbridge it was really all about the satisfaction of at least breaching the visitors defensive wall.  That might well have come in the 64th minute when an Angels corner saw O’Donnell flap somewhat at the ball and there was a split second when the Bradford defence was not in control but no one in a blue shirt could get quite near enough to push the ball over the line.

When the 5th Bradford goal arrived four minutes later through Austin Samuels it simply became a question of how many Bradford might be able to score.  D’Sean Theobalds with a couple of mazy runs tried to stem the tide while a rare mistake in the Bradford defence presented the hard working Joe Turner with a chance that saw his shot go just over the bar.

By then Bradford had scored a sixth goal on 83 minutes through Dylan Mottley Henry and then put some unwanted gloss on the scoreline so far as Angels were concerned with a 90th minute scored by Connor Wood.

Magnanimous, in defeat McKimm said afterwards:  “The scoreline is difficult to swallow but let’s be honest we’ve been beaten by a far better team this afternoon and I don’t think anyone could deny that.  In my opinion the referee has missed a foul on Alex and they’ve gone on and scored a crucial third on the stroke of half time.  I’m not saying that we wouldn’t have lost the game, but who knows the final scoreline might well have been kinder to us.  My players have given their all this afternoon and I now have to lift them for the trip to Chelmsford City on Monday evening.”