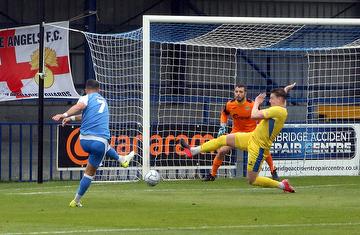 After last week’s reverse at Oxford City, Angels Manager Steve McKimm reverted to a more familiar looking formation which meant there was no place for centre back Rian Bray who had not missed a minute of competitive football since joining the club at the beginning of last season.  Also preferred in the starting line up was Ben Greenhalgh with Khale Da Costa making way and in the heart of midfield it was McKimm’s longest continuous serving player Tom Parkinson to be selected with Tom Beere dropping to the bench.  As it transpired you have to say that the Boss got it pretty well spot on.

After a cagey opening quarter of an hour visiting keeper Lloyd Irish was called into action to deal with a fierce shot from Joe Turner.  At the other end Taunton Town should have done better following a defensive error but a timely interception from Jack Parter averted the danger.

The visitors were to pay a heavy price for that missed opportunity when on 28 minutes a great piece of vision from Tommy Parkinson found the unmarked Ben Greenhalgh moving in from the left flank. The ex Dartford player made no mistake from 15 yards shooting low past Irish to put the hosts a goal to the good.

The lead was further extended on 42 minutes following a free kick that Sonny Miles headed back across goal for Akrofi to steal in at the far post with a header.

Just two minutes into the second half the game turned decisively into the home side’s favour when Taunton’s Jake Wannell was sent off for a second bookable offence for tripping Alex Akrofi whose pace had been causing problems for the Taunton defenders all afternoon.

On 51 minutes the all important third goal arrived and it went to the home side with Greenhalgh’s well executed free kick from just outside the area giving Irish no chance,

With the wind in their favour and the extra man further goals predictably arrived for the Angels.  On 75 minutes D’Sean Theobalds created space for himself down the right flank and crossed for substitute Javaun Splatt to convert his first goal for the club.  Fifteen minutes later with the Taunton defence now stretched Turner made it five for the Angels with a back post header.  There should have been a sixth in stoppage time but somehow Splatt missed when it seemed easier to score, although by then it didn’t really matter too much.

The scoreline was maybe a touch harsh on Taunton Town.  This was in no way a one way traffic contest, the visitors did create half chances with their best player Dan Sullivan generally involved but they will be disappointed that they never really tested custodian Jonny Henly who had a reasonably quiet afternoon.   The sending off was an easy one for the referee with little argument from the visitors.   But credit Akrofi who had led the Peacocks defence something of a merry dance with his pace which had already led to a couple of yellow cards in the 1st half. With the Greenhalgh third goal coming soon after the red card from this point the game was largely sealed in favour of the home side.

Afterwards, McKimm asked how did he feel to be the first manager to lead the Angels to the FA Cup 1st Round Proper since 1972 he replied : “Proud, but it’s the players who should also feel proud. They did really well from 1-11, the subs and the entire squad ; we are a unit we stick together and even those who didn’t get on to the pitch this afternoon are all part of the spirit we have here.”