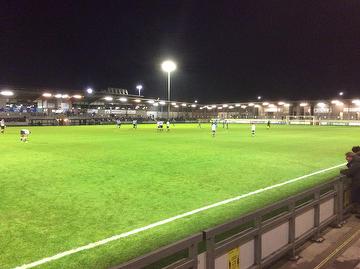 Darts too strong for Academy

Tonbridge Angels bowed out of this season’s FA Youth Cup at Princes Park as a strong Dartford side ran out 4-1 winners.

The game could not have started better for the Angels, going in front after just two minutes when Aiden Murphy converted after some fine work down the left by Akolwole Salami.

Tommy Parkinson’s side contained seven first year students and when Cameron Wootton took a heavy knock after 13 minutes, 15-year-old Finley Hartley was his replacement. Losing Wootton was a blow as he has a physical presence that might have given Dartford’s towering central defensive partnership something to think about.

Salami brought a good save out of the home goalkeeper as Tonbridge continued their bright opening.

But the home side was beginning to exert themselves on the game forcing a succession of corners that with their home side’s height was to cause obvious problems. But the Angels’ goalkeeper, Charlie Martin, was rising to the occasion with a series of punched clearances.

After 32 minutes, Martin made a brilliant save, clawing a shot out of the top corner.

As the time ticked down on the first period and Dartford’s corner count mounting, the Angels finally succumbed when a free kick slipped from Martin’s grasp for Sergeant to stab home.

Martin was back in action before the break with a wonderful low save to preserve parity at the half time whistle.

Both Angels full backs, Chester Smith and Will Amiss had stuck manfully to their task as both Dartford wingers were full of tricks and step overs. But, after 51 minutes, a drive forward and cross from the right enabled Watson a close range tap in to give the Darts the lead.

The Angels were further depleted when influential midfielder Luca Woodhouse limped out of the game four minutes later.

After 64 minutes Dartford scored a goal that could grace the Premier League when Davey met a clearance on the volley from 25 yards, the shot whistling into the bottom corner giving Martin no chance.

Despite conceding a fourth goal five minutes from time through Shepherd the substantial Tonbridge contingent in a crowd of 357 could be rightly proud of their efforts both in this game and in the previous rounds. As was Tommy Parkinson, despite having to concede defeat to his first team mate, Ben Greenhalgh.

Tommy said after the match that his team had been beaten by the better team but his young team will learn from the experience and come back stronger in next year’s competition.