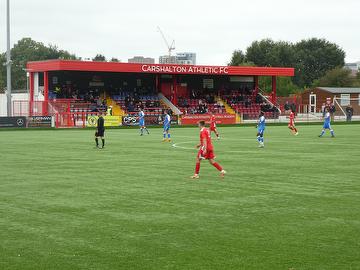 Angels made to work hard by Robins for win

The Angels faced Isthmian Premier Robins on an unseasonably cold afternoon at Colston Avenue in what was the visitors 6th pre-season Friendly with the first opportunity for Tonbridge supporters to see their team ; visual evidence suggests around 40 made the journey.

Tom Beere was the first to show with a decent run into the heart of the Carshalton defence but the final shot was well wide.

The first 20 minutes saw few chances for either side although it was the hosts who were playing the more controlled football with a passing game that was asking plenty of questions of the Tonbridge defenders. There were two decent efforts for Carshalton, one forcing a good save from Joe Tupper in goal for the Angels the other just wide.

Somewhat against the run of play Tonbridge went ahead on 21 minutes. A Ben Greenhalgh free kick was only half cleared, the ball came back to him and he shot with unerring accuracy into the Carshalton net.

There followed chances for Beere and Greenhalgh but it was spectators behind the visitors goal who were seeing most of the action.

Tupper was again called into action on 32 minutes but just got to a Carshalton header. From the resulting corner Robins contrived to miss what appeared to be a. Open goal from 3yards , but there was no doubt the visitors were starting to live dangerously.

With half time approaching  Carshalton no 20 should have done better when through but it was only a temporary reprieve from the Angels as less than a minute later Robins no 2 was well put through and this time the hosts were to be rewarded for all their hard with the scores level at the break.

The Angels at last started to assert themselves with Tom Parkinson having a great chance at the back post and then followed what appeared to be a double opportunity for the visitors. But Carshalton were certainly not in awe of their National South visitors and created several decent chances with Angels keepers, there were substitutions during this period, Tupper and Ted McDonald  both kept busy.

A somewhat rare Tonbridge attack on 79 minutes saw Jason Williams with an opportunity to put his side in the lead but he couldn’t quite get the ball under control.

Five minutes later the hosts really did spurn a genuine chance.  A cross from the left found the no 10 unmarked in front of goal at the near post with just a flick required to put his team in front but somehow he screwed the ball wide.

It proved an expensive miss as up at the other end a Tonbridge attack was only half cleared and there was Jack Parter to thump in a 20 yarder for something of a rare goal.  A shame it won’t go in the record books.

And that was how it stayed with a win for the visitors.  Carshalton will perhaps consider themselves unfortunate not to get at least a draw but their manager will surely be happy with their overall performance.

As far as the Angels were concerned, Steve McKimm said afterwards : “It was a good test for the lads who of course are pleased to get the win.  We thank everyone at Carshalton for the invitation to come and play here as we knew they would give us a good game.  As far as our own performance goes there are some things I liked and some we need to work on but that’s the nature of these games as we continue to prepare for the season ahead.”