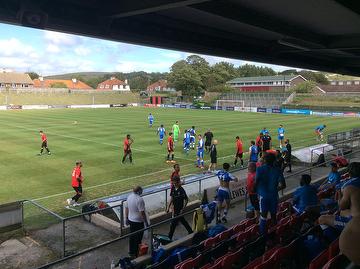 The Angels eventually strolled to a 4-1 victory against Isthmian Premier Lewes at a windy Dripping Pan, but to be fair the hosts battled hard with just the one goal to the visitors at the break.  Boss, Steve McKimm went for three at the back together with wing backs and a strong central midfield.

It was a first half that Tonbridge largely controlled with Christ Tiehi and Joe Turner pulling the strings in midfield and able to release Akrofi and Williams up front.

The Angels should have been ahead as early as the 4th minute with a Campbell corner that resulted in a frantic scramble in front of the Lewes goal but eventually the ball was cleared.  Tiehi, Williams and Akrofi all had half chances but for all their dominance Angels had to wait until the 38th minute for the apparent breakthrough.

Akrofi burst into the area and was brought down by the Lewes ‘keeper for a stonewall penalty. Up stepped Joe Turner but the custodian dived brilliantly to his right to save the effort.

Disappointment for the Angels was short lived however for in the 40th minute a brilliant cross from Khale Da Costa gave Turner at the far post the chance to atone for his earlier miss which he gratefully received heading past the keeper to put Tonbridge one up.

Tonbridge started the second period as they had finished the first with plenty of possession in midfield and the occasional dangerous looking raid by the two strikers.

On 48 minutes Campbell’s shot was spilled by the keeper but Akrofi couldn’t quite get to the ball and the chance was gone.

Two minutes later Tom Parkinson and Rian Bray combined with the latter seeing his shot crash against a Lewes upright.

With Tonbridge looking relatively comfortable they were somewhat rocked back on their heels when the home side equalised on the hour mark. McDonald brought down one of the Lewes strikers when through on goal with the referee deciding on an enforced substitution rather than a red card together with a penalty award which was duly converted so levelling up the scores.

Just three minutes later a goalkeeping error saw Akrofi with an open goal in front of him and he put the Angels back into the lead.

The 68th minute saw another penalty award this time to Tonbridge following a foul on the lively Akrofi.  Having picked himself up off the floor he duly conveyed to make 3-1 to the visitors.

Four minutes from time came the best goal of the afternoon.  Substitute Tom Beere who had already been playing some delightful football since he came on dispossessed a Lewes defender on the edge of the area turned beautifully to face the goal and produced a magnificent  strike that ended up in the top right corner of the net.

A special mention to an ex Angel who was always a favourite at the Halcyon Wealth Longmead Stadium, Luke Blewden.  Towards the end of the game he had a couple of decent chances for the home side to remind us all of his effort and ability.  It’s really good to hear that the injury which at one time had threatened his career has improved to the extent that he has linked up with the Rooks for the third time in his career.  Lewes will need his experience in the forthcoming campaign.

After the game, Angels Boss, Steve McKimm said: “I was pleased with the way things went this afternoon.  We tried a few different things which we had already looked at in training the other evening, and they worked well.  We will have to adapt at certain times during the season and sometimes players will need to be able to operate in a different way from what they are used to.  It would be good if some of our supporters can travel to Carshalton Athletic next Saturday to see us play but we will have to wait and see.  We’ve missed them.”