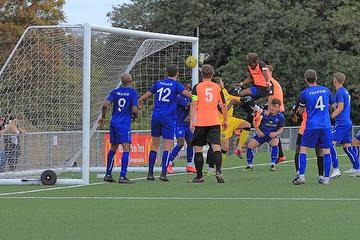 For their final away pre-season friendly, Angels made the journey down to the Kent Coast to play Isthmian Premier Margate, the 4th consecutive match they had tested themselves against opposition from one step below in the non-League pyramid.

It was a very open 1st period with both teams showing plenty of attacking intent with Tonbridge just about deserving their one goal advantage at the break.

In the 2nd minute Tom Parkinson laid the ball off to Joe Turner who fired just over.  A minute later the Margate no 9 went close and on 10 minutes the same player again this time forced a good save from McDonald.

The Angels Alex Akrofi made good progress down the inside right channel on 12 minutes and his cross was met by Javaun Splatt but the effort was just wide. Seven minutes later Tom Parkinson worked himself into a good position but chose to pass when the better option had perhaps been to take a shot.

There followed a chance for the visitors through Khale Da Costa and then Jack Parter’s low cross just needed a touch and surely the Angels would have gone one up.

Just over the half hour mark, Margate had two chances of their own, firstly McDonald was forced into an excellent save tipping over the bar and a minute later a strong header from the Margate no 5 was just over the bar.

It was to prove expensive for ‘Gate with firstly Ben Greenhalgh testing the home keeper from 20yds followed almost immediately by an exquisite lob from the same player to put the visitors deservedly one up at the break.

If the Angels just about edged the first half, then they confirmed their superiority in the second half with a serious of incisive raids that constantly put the home defence under pressure.

There was however to be a scare for the visitors immediately after the restart when a misdirected Rian Bray header put in the Margate no 9. McDonald however was quickly off his line to smother the danger.

At the other end a Tonbridge corner was swept in by Tom Parkinson to put his side 2-0 up on 48 minutes and shortly afterwards there were chances for Akrofi and Greenhalgh.

Margate were seemingly back in the game on the 60th minute when a free kick from the edge of the area was mishandled by McDonald and the ball dropped into the net.

Five minutes later The Angels restored their two goal cushion when from a corner substitute Kristian Campbell attacked the ball and the unstoppable header found the back of the goal.

On 70 minutes it appeared that Margate had clawed a goal back with a fine header and for a moment it seemed the referee had given it but suddenly he called play back and awarded a free kick to Tonbridge for an earlier offence.

The Angels continued to press and probe the Margate defence using the full width of the pitch to great effect and moving the ball with accuracy and pace.  On 72 minutes Jason Williams was put through after good work by Parter and Turner but was unable to get the ball properly under control.

Finally on 84 minutes the contest was over when failing to clear their lines Margate conceded a fourth goal courtesy of a spectacular hooked shot from Kristian Campbell for his second of the afternoon.

Afterwards, Angels Boss, Steve McKimm said: “Pleased with the result, pleased with the performance, but still things to work on. Great to see Parky get another 60 minutes under his belt and for him to grab a goal.  I thank Jay Saunders for having us down here and also to our supporters who were able to make the trip down here and acknowledge the lads at the end.”

Our picture by Ian Clear shows Kristian Campbell heading in his first goal of the afternoon.