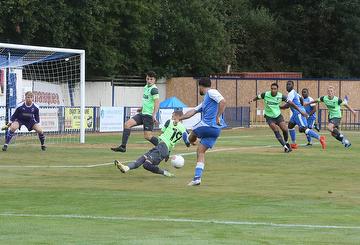 At a sultry Halcyon Wealth Longmead Stadium the home side had slightly the better of the early exchanges with a half chance for Jason Williams following a poor clearance from a Dons defender.

The EFL League 1 visitors however soon got into their stride with a strike in the 9th minute from Ethan Chislett on 9 minutes.

Six minutes later a decent cross from Alex Akrofi just eluded a couple of Angels heads with the goal gaping.  Tom Beere’s free kick for the home side from the edge of the area on 23 minutes just went the wrong side of the upright from a Tonbridge perspective.

Twenty eight minutes on the clock saw a Dons shot crash against the post with Ted McDonald well beaten.

On 39 minutes Beere had a chance to level things up when through and in space, but he couldn’t quite get enough power behind the shot.  Arguably an even better chance for the Angels on the stroke of half time occurred when Khale Da Costa forced a terrific save from the Wimbledon custodian following an Alex Akrofi cross.

Angels keeper, Ted McDonald made a decent block save soon after the restart while Wimbledon’s Ayoub Assai might have done better with a header that went just over in the 55th minute.

Dons doubled their advantage when Joe Piggot directed his header into the far corner of the Angels goal on 66 minutes and that was followed in the 72nd minute by a third goal for the visitors, this time Troy Chiabi the scorer with a fine shot hit with supreme accuracy.

It was not all one way traffic as substitute Tom Derry for the Angels saw his effort hit a post on 75 minutes followed 7 minutes later by a penetrating run from a trialist but the final shot lacked power.

Tom Derry and Khale Da Costa combined well in the 84th minute but the latter’s effort hit from an angle was well wide.  In the dying moments of the game Nesta Guinness Walker for the Dons was through on goal but overran the ball and in truth a further strike for the visitors would have been perhaps somewhat harsh on the home side who had generally given a good account of themselves against superior opposition.

Afterwards Angels Boss, Steve McKimm said: “Apart from the result it’s been a good afternoon. All the new arrangements seemed to go well and I was pleased with a lot of our play although inevitably there were a few things I didn’t like.  Overall it was a big improvement on last Monday and great to see Tom Beere and Tom Parkinson playing together in a starting line up.”