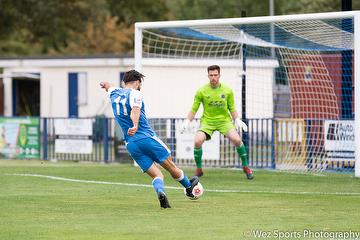 National League Aldershot Town scraped a 3-2 win against an Angels side that always had belief in their ability and so very nearly got something from the game which would not have been undeserved.

A two goal salvo in the space of four minutes put the Shots in a reasonably comfortable position at half time in what was the two clubs final pre-season friendlies.

Until the 27th minute when Joel Nouble fired in the opener from 15 yds, Angels looked slightly the better side with a couple of chances for Da Costa just after the quarter hour mark that on another day   might well have put his side in front.  The ex St Albans winger was the pick of the Home side’s players in that first period delivering a beautiful free kick on 15 minutes and generally creating a lot of openings on the right flank.

The visitors were to double their account on 31 minutes when a great pull back from the bye line gave Mo Bettamer a chance that a striker of his quality was never going to miss.

Despite the two goal deficit, Angels were not overawed by their National League opponents and continued to keep a good level of possession in the second period. Their reward for persistence came in the 70th minute when Joe Turner was on the end of a Da Costa Pass to glide the ball past Mitch Walker.

If the hosts thought they were back in the game at that point they were to be mistaken as that man Nouble scored a wonderful goal executing a curler from around 18 yards that gave Shaw in the Tonbridge goal no chance.

But this Angels side are not one to lie down and on 87 minutes Turner got his second of the afternoon with a close range header that provided an exciting end to the game. Pressure was put on the Shots defence with a goal saving block to give the visitors victory but nevertheless this was a good performance from the Angels which will give everyone a lift as they prepare for next week’s FA Cup tie at Farnborough.

Afterwards, Angels Boss Steve McKimm said: “I thought we played with good intensity today and overall I was pleased with the performance from all of the squad. Myself and the players can’t wait for competitive football to start now and we are really looking forward to next Saturday’s FA Cup tie at Farnborough which certainly won’t be easy.”