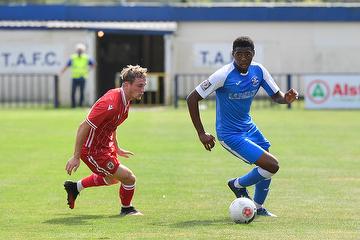 Ravens swoop down on Angels

National League Bromley swept aside their hosts from National South, Tonbridge Angels, with a fine 1st half display that left the team in blue chasing shadows at times.

It was a half that Bromley largely dominated with their quick breaks and the ability to attack in numbers that constantly caused problems for the Angels.

On 11 minutes an attack down the left involving Michael Cheek saw Williamson sweep the ball past McDonald to open the scoring for the Ravens.

Nine minutes later a slack pass from Angels Tom Parkinson put his side in trouble and although the same player temporarily saved the day at the expense of a corner the resultant set piece saw Joe Kizzy eventually force the ball home after a goalmouth scramble.

Williamson with his second goal to put the visitors 3-0 up in the 37th minute with a beautiful 20yarder on the turn.

On the stroke of half time Angels just about kept themselves in the game when Ben Greenhalgh’s in swinging corner was forced home by Sonny Miles.

Angels aspirations to haul themselves back into contention were quickly dashed within two minutes of the restart when Joe Kizzi swept the ball home from close range for Bromley’s fourth goal of the afternoon.

Angels gradually improved from that point onwards but they just couldn’t force that goal that might have put pressure on Bromley. Khale Da Costa in particular on the right flank had a good game and was able to stretch the Bromley defence but colleagues were unable to take advantage of his crosses.

Afterwards Barry Moore, Angels Assistant Manager said: “Obviously we’re disappointed with the result but you learn a lot about yourselves when you play a full time side like Bromley who I thought were excellent today particularly 1st half.”