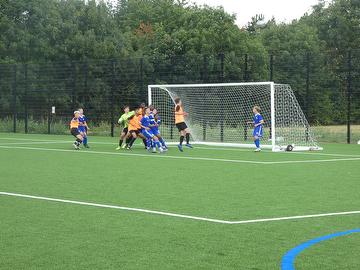 Academy wing it at Welling

Tonbridge Angels Academy eased to a well deserved victory against Welling United, who will themselves take a good many positives from their performance.

Our Academy fielded four first year students from the outset with another two coming off the bench, none of them looked out of place and all contributed to the team’s performance.

Tonbridge dominated the early stages and should have gone ahead after 10 minutes when Joe Rowe steered a header wide at the far post from a Ben Twist corner.

Half-chances fell to Saul Musengeyi and Louis Copeland, whose pace down the right was far too hot for the hosts to handle. So it was against the run of play when Welling took the lead after 26 minutes when a defence splitting pass sent a forward clear to tuck his shot past Charlie Martin and into the far corner.

The lead was only to last two minutes as the Angels struck back with a Copeland cross being converted at the far post by Cam Wotton.

Two minutes before the break, Tonbridge got their noses in front when Copeland scored following some good wing back play from Chester Smith. The lead was preserved when in the closing seconds, Martin made a good save.

After seven minutes of the second half, good work from Joe Tyrie led to Wotton finishing with a close range header.

The visitors dominated for the majority of the second half with the Welling goalkeeper making a fine save to deny Copeland and winning a personal battle with Ned Lewis.

Lewis was not be denied though and when he was brought down in the box, he dusted himself down to convert from the spot after 69 minutes.

Welling made a late stand and, with the aid of a referee’s dodgy watch that extended the second period to 55 minutes (what goes on in Welling stays in Welling, but the ref came from Tonbridge!), they pulled one back with a shot into the bottom corner and might have reduced the deficit even further but for a Martin save at the feet the goal scoring forward.

Academy manager Tommy Parkinson was encouraged with the opening day of preseason reflecting that there were good and bad parts of the game but also adding that a couple of players unavailable for this game will undoubtedly strengthen the team further.