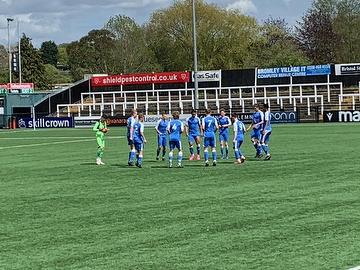 Victory for Angels scholars at Bromley

Our Academy won a hard-fought game at Bromley with an 87th minute header by Harry Hudson from a well-rehearsed corner routine that had twice previously found the skipper’s head but failing to break the deadlock.

In an evenly contested match, both sides had their chances but it was the Angels’ goalkeeper, Nat Gibb, who emerged the hero with a truly remarkable first half save which he followed up with a second period penalty save.

Tonbridge started the game brightly with Ned Lewis shooting narrowly wide after five minutes and, two minutes later, Keiarn Corner saw his effort deflected over the bar having been set up by Lewis.

Bromley responded and gained momentum but despite having several attempts on goal, Gibb was not unduly troubled as Hudson’s back line kept them to long range efforts until a 26th minute header from a free kick cleared the bar.

The home side should certainly have entered the break in front as two chances fell their way in the final five minutes. The first was denied by a wondrous save by Gibb, who readjusted his body weight to divert a well struck and deflected shot onto the crossbar from which the ball was scrambled to safety.

The second followed an uncharacteristic mistake from Hudson that allowed a low cross to the far post where, from two yards, a Bromley attacker inexplicably managed to scoop the ball over the bar.

Two minutes into the second half, Bromley were awarded a questionable penalty following a foul by Chester Smith. From the spot kick, Gibb guessed correctly to get down, low to his left, and save brilliantly.

Tonbridge gained confidence from that moment and started to open up the Bromley defence on the break. Regan Bowden saw his shot saved and Lewis directed a header at the goalkeeper before the corner routine, with Luca Woodhouse playing it short to Lewis to open up the angle for a cross (or vice-versa), produced the first headed opportunity for Hudson on the hour.

With six minutes remaining a Bromley shot narrowly went the wrong side of the right hand post before the Bromley goalkeeper saved at the feet of Cameron Wootton, when a square pass to Lewis would almost certainly have brought a goal.

Due warning was given to Bromley, when the corner routine worked once more with five minutes to go, Hudson heading over but two minutes later it brought its justified reward as Hudson’s header found its way past the goalkeeper.

Tommy Parkinson was very pleased with his side after the game, having been critical of them in recent matches. His side had a fair-sized complement of first year students who all acquitted themselves well.

Picture: Wink Tomkinson : The scholars warm up before the game