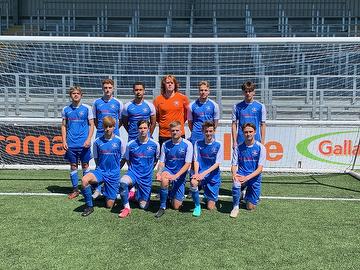 Tonbridge Angels said a fond farewell to their third year scholars with a rousing victory at the home of our A26 neighbours, Maidstone United. Ned Lewis, who will be taking up a scholarship in the United States, and Jacob Lambert signed off with a brace of goals each whilst Harry Hudson and Sam Babayale, who depart for University, along with Harrison Mayhew can reflect on three outstanding years at the club with a solid defensive showing.

At the other end of the spectrum, the Angels fielded seven first year students and three Under-16’s in this performance of virtual domination.

Such was the control that the visitors had on the game, it was added time in the first half before goalkeeper Matt Larkin, drafted in from the Angels’ Under-16 Kent Youth League side, had any sort of save to make.

It was a very warm lunchtime kick-off at the Gallagher with the Angels, fast out of the blocks and producing chance after chance with Lambert ruling the roost in midfield. Lambert forced the first save of many from the Stones’ keeper within the first minute. Ben Hermitage wasted a very good chance after five minutes and the keeper pulled off a blinding save to thwart Billy Kent and so it continued, Tonbridge versus the Stones’ goalkeeper until the half-hour mark when finally the custodian was beaten.

A lofted through ball from Lewis sent Lambert clear to deftly lob the advancing goalkeeper to put the Angels into a deserved lead. This actually sparked the home side into life but a couple of attacks failed to employ Larkin.

Three quick goals in the last eight minutes put a scoreline on the board far more in keeping with the pattern of the game. After 40 minutes, Lambert supplied the pass for Lewis to score from 10 yards and, four minutes later, a well executed cross from Hermitage gave Kent an easy close range header to make it 3-0. Three minutes into time added, Lewis added his second when latching on to a cross from the right, his first shot was well saved but he was on hand to convert the rebound.

After what one would imagine a stern half-time talk, Maidstone made a better fist of the second period but continued to be dominated by the visitors with Lewis and Kent bringing saves and Ben Twist seeing his shot cannon down from the underside of the crossbar.

The fifth goal arrived on 63 minutes when Hermitage set up substitute Cameron Wootton who, once again, needed the benefit of a second attempt as the goalkeeper saved his initial shot.

Larkin showed his potential and desire to keep a clean sheet making two good saves in quick succession before a brilliant run from Keiarn Corner set up Wootton but his shot was smothered by a fine defensive block.

Sadly, Larkin’s debut was not to be celebrated with a clean sheet when, seven minutes from time, he was beaten when the ball was bundled home after saving the initial attempt.

Jacob Lambert said his final goodbye to Academy football with a characteristic finish in the final minute to round off an impressive display that obviously delighted Tommy Parkinson, who said after the game that it was an outstanding performance and on the departing scholars: “All have been a credit to themselves and their families, they have come on leaps and bounds as players over the three years and more importantly become top people who will all have bright futures.”