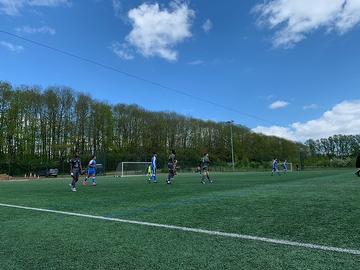 After a blistering start, the Academy got rather caught in a blitz of their own as a very good Dartford side scored eight times to record a handsome victory.

Our old friend Ben Greenhalgh’s side tore apart the Angels as Tommy Parkinson admitted after the match: “We were beaten by a far superior team in Dartford today. But it shows our eight first year students the levels that they need to be at next year.”

Nobody would have guessed the one-sided outcome of this match after six minutes as the Angels raced into a two goal lead. The Angels were really quickly out of the blocks with the goalkeeper saving with his face at the feet of Ned Lewis, having been put clear by Jacob Lambert after three minutes, but within a minute, Lambert finished superbly to open the scoring.

After six minutes the lead was doubled when Keiarn Corner was brought down in the box. Lewis converted the penalty.

But, sadly, that was as good as it got.

It only took two minutes for the deficit to be reduced when the Angels failed to deal with a corner and a header brought the score back to 2-1.

In fairness, the Academy gave as good as they got for the best part of half-an-hour with Lewis bringing a save from the goalkeeper; Lambert dragging a shot wide and Luca Woodhouse testing the keeper.

After 36 minutes, the Angels frailty from corners cost them again and the Darts were level.

Unfortunately the Angels couldn’t get to the break with parity as, three minutes into time added, the Dartford centre forward angled a fine strike from 15 yards into the bottom corner.

A foretaste of the second period came almost straight from the restart when a shot brought a parrying save from Nat Gibb, who brought down an attacker in an effort to retrieve the ball. But a horrible miss from the spot kept the deficit at one. However, this didn’t last long and the Darts went 4-2 up following a goalkeeping error.

The Darts were now completely dominant and after 57 minutes, the centre forward made it 5-2 with a close range effort.

The Academy lads regained some composure and kept the lively opposition at bay for 20 minutes, even carving out a couple of chances or their own, but three more goals in the last 15 minutes gave a scoreline that unnecessarily painted a grim picture.

Dartford are an undoubtedly strong Academy, as the Angels found to their cost in the FA Youth Cup, but the youngsters must take this lesson on the chin and come back all the stronger for it.