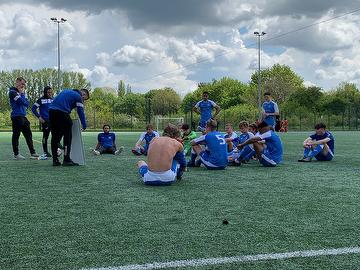 Three late goals added the gloss to a good all round performance from our Academy against Ebbsfleet United.

Tommy Parkinson was naturally delighted that after a faltering start in this post-lockdown tournament, his charges have found their form with successive clean sheets and victories. He said: “I’m really pleased with the last two performances where we have been defensively sound and much brighter in the attacking third. The build up play from the back and the bravery on the ball has been much better which has impacted positively in our results.”

Tonbridge enjoyed the best of the early exchanges with Ned Lewis going close twice and Harry Hudson steering one of his trademark headers from a corner at the visiting goalkeeper.

Ebbsfleet had barely threatened when the Angels went in front on 25 minutes. The danger that Hudson poses from corners proved to much and he was able to poke home at the second attempt.

Kiearn Corner were bundled to the floor in the  35th minute for a penalty, from which he proverbially dusted himself down and converted, sending the goalkeeper the wrong way.

Tonbridge were good value for their half-time lead that could have been extended had it not been for a couple of decent saves.

Ebbsfleet started the second half with a couple of long range efforts that sailed over but found themselves three goals down after 55 minutes when a sublime through ball from Man of the Match Ben Hermitage sent Corner clear to finish calmly.

Three quickly became four when a long ball forward from Ben Twist was superbly controlled by Lewis who then applied a clinical finish.

Ebbsfleet stretched the Angels keeper, Nat Gibb to his first real save of the match, clutching a shot out of the top corner.

Tonbridge’s fifth goal, after 83 minutes, was a case of a hat trick that wasn’t and one that eventually was to be. From a Luca Woodhouse corner, Corner’s initial effort came back from the underside of the bar for Hudson to bury the rebound. Claims that Kiearn’s effort had crossed the line were dismissed by the assistant referee.

Four minutes on time, another clinical finish from Lewis made it six and between that and Hudson’s header for the seventh, Gibb preserved his clean sheet with to great saves diving to his right to push away well struck shots.