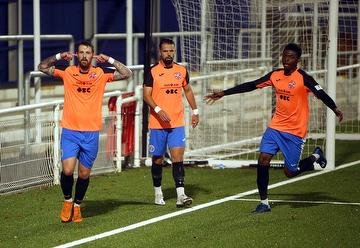 Angels move through the gears

Tonbridge Angels enjoyed their first ever win at New Lodge with a thoroughly determined and organised display of football that left Billericay Town unable to fathom out how to break down a formidable defence and at the same time ensure that their own defence could deal with the dangerous breaks that their visitors frequently inflicted upon them.

Right from the kick off Tonbridge looked comfortable on the artificial surface splaying the ball around with supreme confidence. As early as the 7th minute Jack Parter delivered a sumptuous cross that Tom Beere fed back to Khale Da Costa and the winger chipped the Billericay keeper with the ball gracefully falling into the back of the net.

Billericay tried to work their way back into the game but were continually thwarted by the energy and skill of the men in their orange shirts and blue shorts.  The colour combination may have looked strange but there was nothing strange about the Kent side’s play. McKimm has them playing in a set up where everyone understands their roles but at the same time are prepared to work for each other.

It was no surprise that the game reached half time with the Angels  lead still perfectly intact with no real alarms sounded.

At the start of the second period, there was the inevitable effort from the hosts to gain the initiative but nothing really worked for them.  Even the referee tried to give them a helping hand by dismissing Lee on 63 minutes for a second bookable offence, presumably for time wasting, but if anything it seemed to hand the advantage to Tonbridge.  By now Javaun Splatt was operating up front giving the Billericay defenders a different set of challenges with his pacy runs into the channels.

Chances were falling to the visitors and it was always likely at least one of them would be gratefully received.  On 86 minutes Splatt moved the ball into the left flank, passed to substitute Ben Greenhalgh whose cross  was converted by Tom Beere to give the Angels an unassailable 2-0 lead and that was how it stayed although it’s not too wide of the mark to say that they might have even grabbed a third.

Afterwards Assistant Manager Barry Moore said: Really pleased with the performance tonight. I think on a couple of occasions in the second half the ball flashed across our goal area but aside from that we dealt with their threat pretty comfortably.  Everyone played their part to give us a really good start in our opening league game.