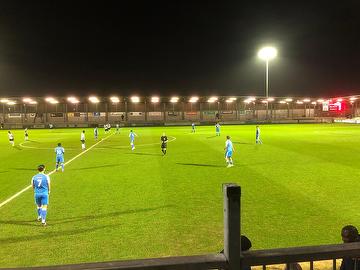 With no competitive football since 15th December a visit to Princes Park, Dartford was probably not the ideal fixture to be facing

It was a half where undoubtedly Dartford enjoyed the greater degree of possession but the hosts were denied too many clear cut chances and Angels will be pleased that they got to the half time break all square.

With two players making their debuts for the visitors, Tom Hanfrey and Adam Lovatt and a general lack of game time for all the players it was a slightly nervous first 20 minutes but they kept their heads. Chances did however come for Dartford came through Noor Husin and Jacob Berkeley-Agyepong

On 19 minutes a Ben Greenhalgh free kick was dropped by Darts keeper Craig King and although Tommy Wood was in close attendance somehow a Dartford defender was just that bit closer to his keeper and the ball was scooped to safety.

Nevertheless it signalled an improvement in the Angels play and there were periods of sensible possession with Zak Guerfi and Adam Lovatt in the midfield areas showing at times good vision.

Still Dartford looked the likelier to break the deadlock with chances falling to Berkeley-Ageypong and the best player on the park Nassim L’Ghoul.

Dartford basically started the second half as they had concluded the first with some good attacking play and it seemed only a matter of time before they would make that all important breakthrough.  They were helped in this endeavour by the Angels perhaps playing too deep and to be honest there was very little attacking threat from the visitors.

On 50 minutes there was a surging run from Alex Akrofi deep into the Dartford penalty area but his attempted layoff fell just short of its intended target, Tommy Wood.  The hero of the hour, however, for the visitors was undoubtedly Henly who made a string of fine saves to frustrate the home side.

With Dartford pressing ever further into the Angels defence the breakthrough had to come and on 81 minutes following an excellent build up L’Ghoul cut in from the right to rifle the ball into the back of the net.

There remained one decent moment for Tonbridge when on 87 minutes Ben Greenhalgh found himself in a good position following an Angels corner but his goalbound effort was blocked.

If Dartford are to win promotion this season, then these are the type of games where they have to grind out those three points by keep plugging away and eventually the pressure will tell.

Afterwards Steve McKimm said : “We need to start picking up points, we have not been disgraced tonight but a touch disappointed we didn’t carry on in the second half what we did in the first half, however I’m proud of what the boys have done tonight bearing in mind Dartford are probably the promotion favourites.”