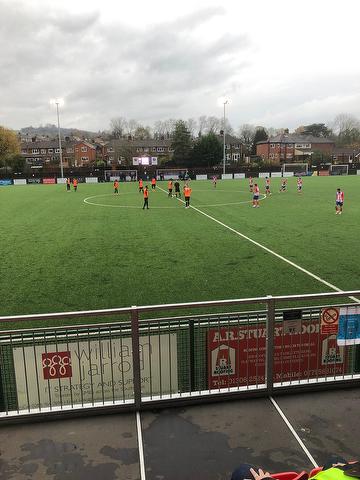 Angels were well beaten by a Dorking Wanderers side; it was however the view of Boss Steve McKimm that his side were architects of their own downfall by failing to control one of the divisions top strikers in Jason Prior.

With Sonny Miles and Arthur Lee out through injury it was something of an adjustment to the Angels defence for the National South fixture away to one of the favourites expected to be there or thereabouts come the end of the season.

Tom Parkinson was to partner Rian Bray and Kristian Campbell in a 5 man central defence with Jack Parter and James Folkes the two full backs. The midfield consisted of D’Sean Theobalds, Tom Beere and Khale Da Costa and up front Alex Akrofi and Tommy Wood competed the Angels starting line up.

Joe Turner, whose occupation as a teacher required him to work in the morning, Ben Greenhalgh, Javaun Splatt, Jason Williams and substitute keeper James Shaw made up the bench.

It was a cagey opening quarter of an hour although the Angels did manage to create a couple of openings with Tommy Wood just off target with a header after 8 minutes, 4 minutes later Da Costa and Akrofi combined with the latter’s effort just wide of the right hand post.

The game came alive on 16 minutes when a Nick Wheeler cross was converted for the host’s opener by Jason Prior.  Dorking’s advantage was doubled just a minute later when Wheeler again provided a delicious cross and this time it was Wes Gogden the grateful recipient.

It took Angels at least 10 minutes to recover from this double blow but gradually they worked their way back into the contest. Da Costa on the half hour mark made a great run down the left but it eluded attackers and defenders in the Dorking area.

Da Costa was again involved when he fed Akrofi. There was hesitancy in the Dorking defence and the striker found himself clear and was able to roll the ball past Slavomir Huk the Dorking keeper.

Angels needed to hold that score line until half time but Dorking had other ideas and on 40 minutes there was Wheeler again tantalising the Angels defence and getting a cross in that was neatly converted by Prior for his second of the afternoon.

Four minutes into the second half Dorking’s James McShane found himself free on the right and his effort was just over. If Tonbridge had any hopes of rescuing something from the game those hopes were pretty much extinguished on 53 minutes when ex Gillingham Barry Fuller crossed for Prior to claim his hat trick for the afternoon.

The game lost some of its gloss as the half proceeded with Dorking reasonably happy to sit on their three goal advantage while Angels although enjoying quite a lot of possession were unable to work out how to break down the home sides’s defence.

As the clock ran down that man Wheeler provided another cross which Prior should have put away for his fourth and then Angels keeper Jon Henly made a couple of smart saves to keep the score line at least respectable from a Tonbridge point of view.

Angels substitute Joe Turner had at least brought some ingenuity and creation to the Tonbridge attack but even he was unable to bring any realistic recovery and Dorking Wanderers were able to maintain their three goal advantage.

Afterwards, McKimm said:”You can make excuses about missing two of our regular centre halves due to injury, but I don’t accept it.  We simply failed to deal with Prior who we know is a top striker at this level and we let him have far too much room and suffered because of it.  I felt at times we were too soft on them and they will hurt you if you let them play.”