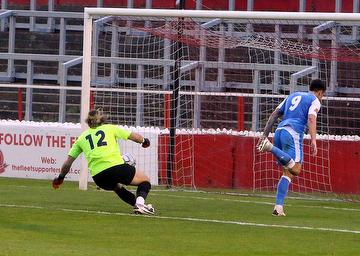 Angels take the points at Ebbsfleet

This was however no lucky win but victory for a tactical masterclass forged out of the heads of Steve McKimm and Barry Moore and carried out to the letter by their players. On paper it was always going to be a testing fixture for the Angels against a full time club, but with a five man midfield including a name from the recent past, Tom Phipp, with just the one striker up front, Tommy Wood, Ebbsfleet were to enter into a spiders web out of which there was no genuine outlet for their strikers to make a mark.

Despite all the possession that the Fleet had, Angels goalkeeper Jonny Henly never had one serious save to make partly because when the hosts did manage to get a sight on goal their final efforts were generally wild.  It can be argued that Jordan Holmes was not particularly busy at the other end but with one crucial exception he had to pick the ball out of the net once.

That Tonbridge goal came at a great time from their point of view right on the stroke of half time. Largely restricted to occasional breakaways this particular one saw a combination between Joe Turner and James Folkes on the right flank. A great 1-2  between those two saw Folkes cross the ball into the danger area and there was Wood who had stolen in to grab his second in two games and set the Angels on the pathway to an important three points.

If the first half had seen the majority of possession go Ebbsfleet’s away then the second half was at times one way traffic with only Holmes in the home half.       The almost constant Ebbsfleet pressure meant hard work for all the Angels team but there were some standout moments typically James Folkes goal line clearance on 73 minutes and Sonny Miles brilliant tackle deep in his penalty area, one of those you simply have to get right otherwise it’s a penalty.

And talking of penalties there was a strong appeal by Ebbsfleet for a spot kick as the game reached its final conclusion but the referee was close and instantly waved the appeal away.

The game became more stretched as it entered stoppage time, and Ebbsfleet had to resort to the long ball game but it played into the Angels hands and despite the extra four minutes, the visitors saw it out comfortably to record their first League win at Stonebridge Road since the mid 80’s.

Afterwards McKimm said : “People will always talk about what players do with the ball but equally important is what you do when you don’t have the ball.  All my payers followed the instructions and understood what they had to do even though at times they were getting little possession.  The whole team was fantastic today and I’m very proud of all of them.”