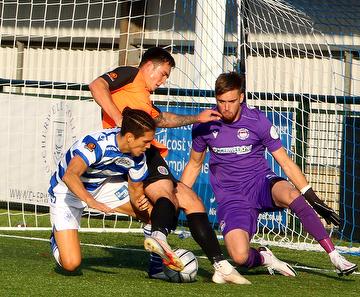 It was a half where the Angels were for at least the first 30 minutes totally outplayed by a vibrant Oxford City.  Their manager might have somewhat downplayed their 6-1 midweek FA Cup demolition of Tamworth but the evidence was there for all to see either in person at Marsh Lane and a greater number tuning into the live stream.  The visitors couldn’t live with the pace, accuracy of passing, movement off the ball and pressing that their hosts offered up

The goals came at 9, 17, and 27 minutes and in all honesty it could have been so much more with the Angels woodwork being hit early on and Jonny Henly called into action on numerous occasions.  Standout players for the hosts were James Roberts and Harvey Bradbury but in truth the entire squad looked more than useful.

In the first minute Sonny Miles had a shot across goal that took a touch for a corner but we had to wait until the 33rd minute for the next genuine chance for the visitors when Joe Turner’s cross was controlled by Alex Akrofi but Tommy Wood could only hit the ball somewhat into the ground and it lost all power.

In the  last 15 minutes of the half Angels did come back into the match somewhat but without any real conviction in terms of reducing the arrears.

The second half saw the introduction of Ben Greenhalgh who brought some stability and some invention to the side but it was always going to be a long way back for the Kent side and that was before they started out on the coach ride  home.

Just to confirm that normal service had been resumed Oxford’s no 4 launched a free kick in the 48th which went just wide of the Tonbridge right hand post.

The game did become much more even with Akrofi in the 56th minute creating a problem for the Oxford keeper but Ben Dudinski did well to block the effort.

With Greenhalgh’s promptings there was more urgency to the Angels play with the aforementioned completing a dangerous looking cross towards Tommy Wood in the 70th minute who it appeared may have been fouled in the area although the referee was unmoved.

Nine minutes later there was a half chance for Wood but he was unable to position himself properly to get the shot away.

There continued to be a threat from Oxford City and it always seemed likely that they might add to their goal tally.  And so it proved in the 86th mInute with substitute Elliot Benyon out running a tiring Angels defence to place the ball with deadly accuracy past Jonny Henley.

Afterwards, Angels Boss Steve McKimm said: “We’ve been beaten by a better side this afternoon, no arguments and sometimes you have to stand up and accept defeat by players who on the day were more skilful and were able to want it just that little bit more than us.  Maybe some people got a bit carried away after that win at Billericay.  Yes we have got a good squad but some of our players haven't played that much competitive football recently. They will settle down, they will start to play better together and we are certainly not going to start pressing any panic buttons just yet.”