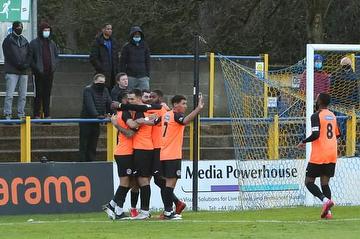 On form Saints brush Angels aside

Ian Allinson’s St Albans City have hit a rich vein of form and a somewhat half hearted Tonbridge Angels performance was not going to stop them gong to the top of The National South Table.  In fact it was a good day all round for the hosts as their positive performance was watched by 700 of their supporters, the first time this season home fans had been admitted to Clarence Park.

It had however all started so well for the visitors as they stormed into the lead after just 6 minutes.  Some good work by Ben Greenhalgh on the left flank was completed with a deft cross to the back stick where Joe Turner was lurking unmarked to open the scoring.  A minute later Greenhalgh was again causing problems with his cross this time causing keeper Michael Johnson to just about manage to tip the ball over.  That was about as good as it got for Angels.

On 16 minutes Angels James Folkes bravely blocked an on target effort but was injured in the process. The referee stopped the game with St Albans still in possession in a dangerous area.  When the game restarted they were given a free hit on the edge of the penalty area with Mitchell Weiss losing his marker to head home with a glancing header.

Virtually the remainder of the half saw St Albans on the offensive although with a well organised Angels defence and keeper Jonny Henly in good form it was still all square at the break.  Just after the half hour mark a good run by Angels new signing Zak Guerfi put him clear, but he had been driven just that bit too wide and the final cross in lacked genuine quality.

With everything to play for one might have expected Angels to have a bit of a go, but it was The Saints who dictated affairs over the next 45 minutes.  Accurate passing, good running off the ball and clever play on the ball provided something of a masterclass of the game at this level and quite frankly Angels never came close to matching it.  Goals for the home side were inevitable with a fine attacking move down the left flank that ended with a free kick in a dangerous area and Sonny Miles unable to prevent putting through his own goal in the 70th minute.

Five minutes later the game was over as a contest when a lazy tackle by Rian Bray on a St Albans winger saw the referee point to the spot with Shaun Jeffers giving his side a two goal cushion.

Deep in stoppage time Angels did have a couple of chances with a Greenhalgh cross forcing Johnson into a fine save and then the keeper himself having to readjust having misjudged a rather hopeful shot.

The score line may have had an air of respectability about it but that was much about Henly who had a fine game between the sticks for the visitors. It was largely a performance to forget for the team based in Tier 3 in Kent and they will definitively have to raise their game for the visit of Hornchurch next Tuesday in the 2nd round of the FA Trophy.

Afterwards a disappointed Angels Assistant Manager, Barry Moore did not hold back on criticism of his team’s performance.  “It was entirely unacceptable, we cannot continue to have this inconsistency and with players coming back from injury and suspension there will be competition for places which must be a good thing.”