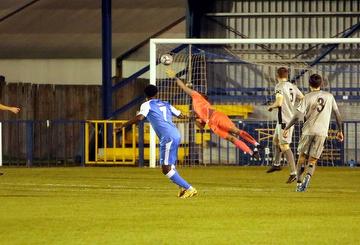 Coming into the game following two league defeats and a cup exit it was well time to reverse that run and the Angels succeeded in that in some style with a 4-0 defeat of  Chippenham Town.

All the squad played well but Angels Boss, Steve McKimm will be particularly pleased with the way his three recent signings, Tom Hanfrey, Matt Rush and Adam Lovatt seemed to have settled into the team.

It was the usual centre half pairing of Sonny Miles and Rian Bray with Jack Parter and new signing Tom Hanfrey the two full backs. Centre midfield comprised loanee Adam Lovatt and the returning Tom Beere with the width provided by Joe Turner and Khale Da Costa. Tommy Wood and Alex Akrofi were the two strikers.

The match saw a quick start for the Angels with an early foray involving Hanfrey, Beere and Turner and although that attack was repulsed the home side continued to press. On eight minutes Lovatt won the ball which was then held up by Wood who released Da Costa, and it was his pinpoint cross allowed Turner to take a touch before calmly placing the ball past Puddy to open the home side’s account.

Chippenham were stung into action and within the space of two minutes launched two attacks one of which required Jonny Henly in the Angels goal to make a decent save, the other with a header just over the bar.

An ugly foul on Beere in the 24th minute resulted in a straight red for Chippenham’s Callum Gunner although within two minutes the visitors might well have drawn level but Henly again denied the Bluebirds.

A decent spell of Angels possession eventually led to a second goal with Da Costa running through to force the ball into the Chippenham net. The home side finished the half well on top although striker Wood of all people had to be on hand at the stroke of half time to smother a dangerous Chippenham attack.

With the Angels adding a third on 52 minutes through Wood following good work by Alex Akrofi the final result never really looked in doubt although Chippenham, to their credit didn’t throw in the towel and kept the Angels defence very much on their toes.

Tommy Wood could have got a second work after Hanfrey put in an excellent cross and Akrofi might have done better on 71 minutes but the shot was blocked. It was the home debutant Matt Rush on loan from EFL Southend Utd who got a touch from a Da Costa corner to poke the ball over the line for the Angels fourth and final strike.  He also saw another chance hit the base of a Chippenham post as his searing pace undoubtedly unsettled the tired Bluebirds defenders.

Although Chippenham kept working hard to at least try and get a consolation, the Angels were in no mood to have their clean sheet snatched away from them and the four goal advantage was to prove the final result.

Angels Man of the Match as voted for by our loyal Twitter followers was Khale Da Costa.

Afterwards, a very pleased McKimm said: “I was in a position to put out a strong side tonight including the bench. There will be competition for places right across the park which as a manager is how I want it to be. Everyone played well and I was very pleased not only with the goals but also the clean sheet.  It may have been against 10 men but remember we lost against 10 in the Trophy so you still have to put in the performance.”