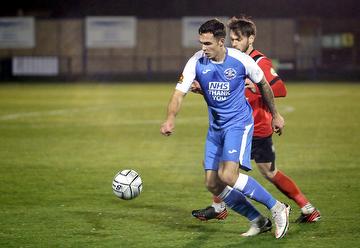 Angels pegged back by Eastbourne Borough

Angels had to settle for a point despite taking a two goal lead in a high octane game with plenty of quality play, and despite the issuing of two red cards it was the football from both sides that won out on the night.

A straightforward 4-4-2 formation for the Angels saw Kristian Campbell partner Rian Bray in the heart of defence with James Folkes and Jack Parter the two full backs. Tom Beere and D’Sean Theobalds manned the Angels engine room while Joe Turner and Ben Greenhalgh provided the width.  Alex Akrofi and Tommy Wood were partnered up front as the strikeforce.

Perhaps one of the fastest goals ever scored at The Halcyon Wealth Longmead Stadium saw Alex Akrofi make a great run up the right flank, his effort was blocked but there was Tom Beere to stick away the rebound.  The goal time was officially recorded at one minute but there had only been 22 seconds on the clock.

With that early lead Angels continued to make all the running with chances falling to Wood, D’Sean Theobalds and Joe Turner. The home side will be disappointed with only the one goal advantage at the break as it should have been so much more.

The visitors didn’t look as if they fancied it too much with poor distribution their own main enemy.

It was perhaps inevitable that Eastbourne Borough would improve in the second half, for they couldn’t have been much worse.  The game became a much more even affair with chances at both ends but it was Angels who went further ahead on 59 minutes with a lovely flowing move involving Ben Greenhalgh, Joe Turner and Wood scoring his first goal since returning to Tonbridge.

At that point the hosts looked comfortable and were continuing to play some great football.  Ten minutes later Eastbourne managed to pull a goal back through a terrific strike from Dean Cox who shot from distance and suddenly it was game on.

On 71 minutes Angels Jack Parter was shown a straight red for a dangerous tackle and the game was starting to swing in Eastbourne’s favour.  On 81 minutes Cox hit the woodwork and five minutes later his team drew level through Charley Kendall.

Were Tonbridge to be denied getting anything from the game having been so dominant for the first hour of the match.  In fact there were half chances for both sides to claim all the points but in the end the draw was a fair result.  Late on Kei Woolard-Innocent for Eastbourne received his marching orders for a second bookable offence.

Afterwards, Angels Boss, Steve McKimm said: “I thought when we got our second we looked comfortable and set to go on and win the game, but the sending off obviously changed things and in the end we had to settle for the draw.  I’m pleased that we didn’t lose the game against a good Eastbourne side and pleased with the way we played overall this evening.”