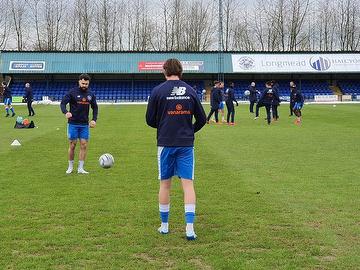 Hampton & Richmond Borough fully deserved the three points and while both sides hadn’t played since 12th January it was the visitors, who have an excellent away record, and were able to continue that good form.

It was a first half masterclass as Hampton completely bossed the game and fully justified their two goal advantage at the break.

On 15 minutes a free kick for the visitors saw them open the scoring through Charlie Wassmer with a looping header with keeper Jonny Henly stranded.

On 31 minutes the lead was doubled when a mix up in the Angels defence allowed David Fisher to run through and rounding Henly he slotted home via a post.

It was no more than the Beavers deserved with a number of other chances created through their incisive play which left the Angels chasing shadows.

Best moment for the hosts in that opening 45 minutes came when Alex Akrofi was brought down just outside the area with Khale Da Costa’s free kick blocked by the wall, and a Joe Turner long range effort that just skimmed the upright.

The game was out of sight for Tonbridge when Hampton grabbed their third in the 46th minute. A cross from the right saw full back Donaldson in acres of space with an easy header to give the Beavers an unassailable lead.

Hampton continued to dominate with Henly in the Angels goal frequently called into action with some excellent saves.

Tonbridge did improve with the introduction of Zak Guerfi and D’Sean Theobalds in midfield but never really looked like threatening the Hampton lead who on this evidence must surely be a decent bet for the playoffs.

Afterwards Angels Boss Steve McKImm said: "It was a fully deserved win for Hampton and is the result of three year plan in building up a really decent side by manager Gary McCann.  Obviously its difficult for everyone just at the moment but I'm not using that as an excuse for our defeat as it's the same for everyone.  We need to pick ourselves up and go again at Concord Ranger on Tuesday evening."