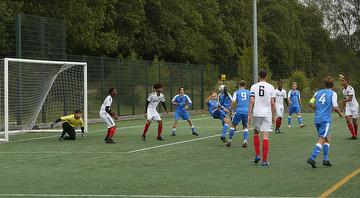 Academy side off to dominant start

Tom Parkinson's Academy side got off to the best possible start in their National League U19 Alliance season, by racing into a 5-0 lead within the first half hour.

In fact it took just 41 seconds for the home side to get on the score sheet. A quick incisive passing move resulted in last season's Academy top goalscorer Ned Lewis wasting no time at all in opening his account for the season. Centre forward Cameron Wootton, a newcomer to the Academy's Elite Squad, was next to get his name on the board in the seventh minute. The number 9 was released in plenty of space through the middle and calmly placed his shot to the goalkeeper's right.

The early stages saw Tonbridge carve open the Charlton defence time and time again and on 15 minutes Lewis broke into the penalty area only to go down under a challenge. Lewis picked himself up to take the penalty but it bounced away off the post, the first of a number of chances that the Angels forwards will believe should have been converted on the day.

Three more goals followed in quick succession. On 22 minutes Wootton pounced on a loose ball after Harry Hudson won the ball in the air, and at the second attempt got his shot in off the post. Two minutes later the lead was 4-0; Lewis proving to be quite clinical in dispossessing a hesitant defender and then rounding the goalkeeper to finish. The same player would bring the tally to five in the 28th minute, thus completing the hat-trick, but following this effort goals would suddenly prove harder to come by and this continued for much of the second half. A combination of disappointing finishes and markedly improved defensive work by the visitors kept the score at 5-0 until the final quarter of an hour.

This 'stalemate' was to be broken in spectacular style on 76 minutes. Angels won a corner from which a header was cleared off the line, but with the ball played back into the crowded penalty box, centre-back Joe Tyrie perfectly timed an overhead kick to loop the ball over a stranded Athletic goalkeeper.

There was time for another goal to round off the scoring, and it was Wootton with his own hat-trick goal with a finely executed header from a well measured cross by Tyler Richardson.

The majority of the starting XI will take part in next week's FA Youth Cup tie against Whyteleafe which will be the first competitive match to be held at the Halcyon Wealth Longmead Stadium for some seven and a half months. Spectators are permitted to attend this match and tickets can be purchased here.  Please note that entry must be by tickets purchased on line.  There will be no pay on the night entry.

"A good start to the season for our elite squad today! A good 1st half and lots of chances created but need to be more clinical in the final 3rd."