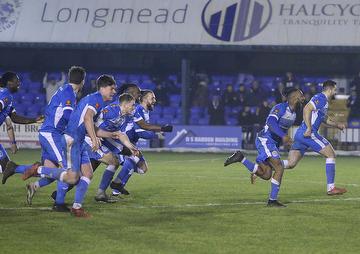 Angels through in shoot-out drama

History was made when Tonbridge Angels reached the last 16 of the FA Trophy for the first time when 19-year-old Luke Jenkins slotted home his spot kick to win the shoot out 4-3.

The game was taken to the dreaded spot kicks after Tommy Wood had equalised in the 83rd minute after the visitors, King’s Lynn Town had taken a 75th minute lead with a curling free kick from the edge of the box from Joshua Barrett.

The first half brought very few chances with the visitors perhaps having the greater share of the possession but the Angels, finished the half the stronger, having the clearer of what were very much half-chances.

Tonbridge were on the front foot from the outset of the first half and almost went in front on 51 minutes when Wood’s cross from met by Joe Turner who shot hit the post before the ball was scrambled to safety.

The National League side took an undeserved lead after 75 minutes when a foul on the edge of the box allowed Barrett to curl a shot from 20 yards beyond the reach of Jonny Henly and into the net.

The lead was to last eight minutes as substitute Aaron Smith-Joseph managed to get in a cross from the left under pressure that was met at the far post with a header from Wood that goalkeeper Paul Jones could only help into the net.

Both sides had half chances to win the game before the spot kicks but to penalties it went. King’s Lynn’s first penalty from Michael Clunnan was saved by Henly and Ibrahim Olutade scored to give the Angels the lead. Successful penalties (Angels from Turner) took the score to 2-2 before Adam Lovatt missed his spot kick. King’s Lynn missed their fourth penalty and Craig Braham-Barrett restored the lead. King’s Lynn’s final penalty was scored, heaping the pressure on the young shoulders of Jenkins, but with nerves of steel he sent the visiting goalkeeper the wrong way and the Angels had made it to the FA Trophy last 16!

A naturally delighted Steve McKimm said after the game: “The players, to a man, were an absolute credit to themselves, their families and the club. We are in the draw on Monday and that’s a fantastic advert for Tonbridge Angels. For the season we’ve had so far, it’s brilliant."

Hero Jonny Henly, who saved two spot kicks, remarked: “Big respect to all the players that took penalties, they are the ones under the most pressure. As a goalie, you are not expected to save them, but I did and it’s great for the club."

It was an excited attendance of 835 that left Longmead looking forward to Monday’s draw which is live on TalkSport2 at 3:15 pm.  The Angels are ball no. 7.