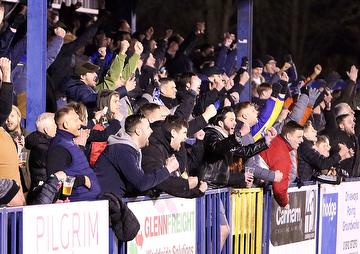 Tonbridge Angels from National South delivered a knockout blow to National League Torquay United in this FA Trophy 3rd Round tie and certainly they merit their place in the next round with a performance that was full of grit and determination.   Although playing against a full time professional side the Angels were never overawed even though their squad had been severely depleted through injury and Covid.

Torquay went straight into the attack forcing an early corner which was successfully dealt with by the Angels defence.   The visitors were however quickly to discover that they would have some work to do when they fell behind in the 9th minute.  Torquay conceded a free kick wide on the Tonbridge left 25 yds from goal with Sutton United loanee Adam Lovatt stepping up to deliver.  Angels leading goalscorer Turner rose highest to place the ball past Halstead in the Gulls goal.

Turner nearly caught out Halstead but the keeper deftly pushed the ball over the bar.  From the resultant corner Tonbridge had a great chance to double their advantage but as the ball bobbed around the Torquay area there was a block on the line and it seemed perhaps to be a turning point in the game.

Lapslie and Moxey were starting  to ask questions of the Tonbridge defence and Torquay’s superior status was starting to tell. It was perhaps no surprise when the Gulls pulled level on 36 minutes. A clever through ball from the left found Danny Wright in a great position and he made no mistake from close in.

It seemed that the visitors would start to impose themselves and Tonbridge would have been grateful to hear the referee’s half time whistle.

The second half continued to see Torquay show class but somehow Tonbridge with their more direct football were starting to slightly unsettle the team from Devon.  Lovatt for the Angels was just over and at the other end Lolos shot straight at Henly when anything either side would surely have put Torquay in front.   On 65 minutes Tonbridge had the ball in the visitors net but it was ruled out for a foul earlier in the passage of play.

Armstrong and Martin both had efforts for Torquay but it looked as if the dreaded penalties would be needed to settle the result. A series of corners for the Angels demonstrated their increasing dominance and on 86 minutes a fine delivery from Beere saw Halstead drop the ball and there was Ibrahim Olutade to knock the ball into the net and send the Tonbridge faithful into raptures and the 4th round.

Afterwards a jubilant Angels Manager Steve McKimm said : “Very proud of everyone, the players, the staff and supporters.  It was a big game which in the end we did enough to win. Our focus in now training Tuesday and Thursday in preparation for Maidstone next Sunday.”