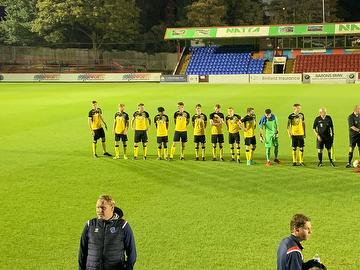 So Tonbridge Angels wait for a place in the FA Youth Cup First Round will need to wait for another year, but the management and squad of the Youth team can be rightly proud of their efforts at the home of National League Aldershot Town last night.

Not since 2004 has the club’s name graced the first round draw, but as Academy manager Tommy Parkinson said after the game, there was very little between the sides bar a wonder strike from 25 yards and a last kick goal when all bar Nat Gibb in the Angels goal was thrown forward in a desperate search for an equaliser.

The celebrations of the entire Aldershot squad following the second goal emphasised their relief.

The game barely threw up a clear cut chance inside the box for either side but when the ball from a corner fell at the feet of skipper Joe Tyrie, it took a brilliant smothering save from Harvey Keogh to preserve the Shots parity.

Tonbridge started the game really well and dominated the opening 20 minutes but without testing Keogh too much. Finn Hartley shot narrowly wide and Luca Woodhouse fired over, whilst in the 15th minute, Angels’ goalkeeper Gibb made a good save turning over the bar an effort from Harvey Limb.

After surviving the initial period, the home side wrested the momentum from their visitors and pressed hard for the opener. Limb again narrowly cleared the bar but Gibb was mostly untroubled during this time.

A Woodhouse free that was just wide of the right hand post was as close as anyone had come to breaking the deadlock.

An early header from Tom Green from a free kick was the opening chance of the second half but it was directed at Keogh.

Aldershot stepped up their game and they took the lead after 55 minutes after a period of pressure. Kailen Davey picked up a loose ball in midfield and from 25 yards found the bottom corner with a quality strike.

The Angels youngsters responded well to the setback with Ben Hermitage forcing Keogh into a decent save after 57 minutes and three minutes later Cameron Wootton headed over a Leo Vowles cross.

Harry London saw his shot deflected wide and following a series of corners, the big chance fell to Tyrie after 69 minutes. A yard left, a yard right, such small margins but Keogh emerged as the Shots saviour.

Aldershot stifled the game in the last 20 minutes to the point that Keogh was booked for persistent time wasting but it was game management being well executed.

Into time added, the Angels had one final free kick from Woodhouse that was brilliantly saved by Keogh and then, in the 96th minute, Finn Evans was sent clear and clinically finished past the advancing Gibb to end Tonbridge’s involvement in the competition for this season but everyone can look back with pride in their performances.