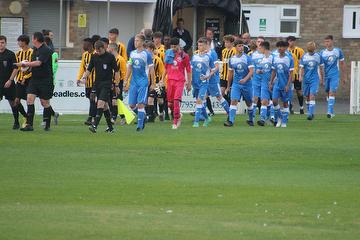 Tonbridge Angels cruised into the FA Youth Cup First Qualifying Round with a seven goal demolition of their hosts Folkestone Invicta. The Seasiders had no answer to Finn Hartley who helped himself to four goals.

Tonbridge signalled their intent in their very first attack when Folkestone goalkeeper Cameron Davey made a very good save, turning an effort over the bar from Leo Vowles with little more than 10 seconds on the clock.

It was an electric start from the Tonbridge youngsters who went close twice more before taking the lead on eight minutes. A cross from the right from Josh McArthur eluded Cameron Wootton but found Hartley who fired into the bottom corner.

Tonbridge took control of the game after 14 minutes when a cross from Vowles was swept home by Hartley and they had countless chances to increase their lead with Davey making an exceptional save to deny Hartley a first half hat-trick.

The second period started in much the same vein but Folkestone at least forced Tonbridge goalkeeper Nat Gibb into his first meaningful save after 52 minutes.

But, for Folkestone, it was a brief foray into opposition territory as Tonbridge once more dominated until they finally broke through after 67 minutes when Wootton set up Hartley to complete his hat-trick from close range.

Sadly, for the home side, their heads went down after that goal and Tonbridge capitalised fully. On 77 minutes, a shot from McArthur was well saved but only parried to Wootton who unselfishly set up Vowles for number four.

A superbly struck free kick from 20 yards by Harry London made it five with 10 minutes remaining and a minute later Wootton buried a shot into the bottom corner for a well deserved goal.

Hartley rounded off a fine performance in time added when he converted at the far past after good work from Sam Grant.

In the First Qualifying Round the Angels will travel to K Sports who received a bye in the Preliminary Round when their opponents Lewisham Borough withdrew from the competition. The game is scheduled for the week of 13th September.