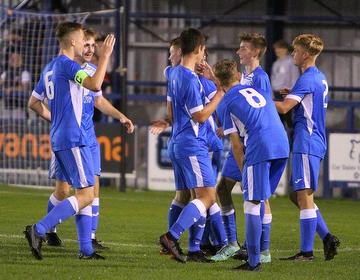 Five second half goals in 15 minutes turned a competitive FA Youth Cup game into a rout with a Fin Hartley hat-trick the highlight as Tonbridge Angels progressed into the Third Qualifying Round.

A naturally delighted Tommy Parkinson said after the game: "First half I didn't think we were at the levels we expect of the lads but second half we stepped it up, scored some some well worked goals, and thoroughly deserved the win."

A cautious start from both sides was broken after 12 minutes when an effort from Hartley deceived the Croydon goalkeeper, Daniel O’Donovan to sail over his head and into the far corner. The Angels’ celebration cared little whether he meant it or not!

From being in control of the game, the Angels defence put themselves under pressure with some careless passing. After 17 minutes, goalkeeper Nat Gibb retrieved a situation with a save from Croydon’s Blessing Mombasa after an initial hesitation had offered the striker the chance.

But it was the Angels that largely dominated the half and they might have gone into the break two goals ahead when a flowing move saw Cameron Wootton’s first shot parried by the goalkeeper and the follow-up only finding the side netting.

The opening of the second period saw a far more positive Croydon side and Gibb was twice called upon in the first five minutes to save from Bola Noikin and Mombasa.

Having survived the opening 10 minutes with their lead intact, Tonbridge went two up after 57 minutes when central defender Tom Green crossed for Wootton to eventually bundle the ball home at the far post.

This began the 15 minute spell that blew the game away from the visitors. After 61 minutes a cross from the right was half cleared to the edge of the box from where Harry London’s superb volley whistled into the bottom corner.

Four more minutes passed when Hartley was sent through and his cleverly dinked shot over the advancing O’Donovan surely put the game out of Croydon’s reach.

After 69 minutes, Hartley turned provider and Ben Hermitage finished well and as the Croydon heads dropped, Hermitage returned the compliment and Hartley completed his hat-trick, with, once more, a cleverly dinked finish.

The game was over but not quite for the impressive, man of the match Hartley. Firstly, he took a knock and had to leave the field but with all substitutes used, he returned only to pick up a yellow card! All in a night’s work for the 16-year-old!

With a crowd of 133 in attendance, the draw will be eagerly awaited later this week to see who and where the Angels’ youngsters will be playing in the final qualifying round scheduled for the week of Monday, 11th October.