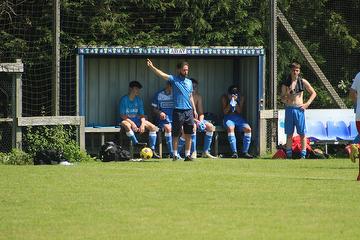 7 Up in scorching heat for Angels U18s

The return of Isthmian Youth team football to Tonbridge Angels started to feel very real with the publishing of the fixtures seeing a home fixture first night out on Monday, 23rd August against Cray Valley PM.

Dominic Welsh has been diligently putting together his squad for the new season, a mixture from last year’s Under-18’s and Under-16’s four of whom featured.

Tonbridge started the game on the front foot with Harry London forcing the Uckfield goalkeeper into a save after nine minutes. It took 20 minutes for the Angels to breakthrough with Ethan Knight applying a cracking finish after being sent clear by London.

Once the opening goal had been scored, Tonbridge took complete control whilst playing some attractive football. Max Cormack struck a post before another splendid shot, finding the net from 20 yards from London after a corner was half cleared set up a rush of goals before the break.

A well worked goal with Cormack and Hayden Velvick linking before Cormack finished with a tap in for the third. A fourth was added on the stroke of the break when the very impressive Harry London opened up the Uckfield defence for Fin Wolvey to fire the ball into the bottom corner.

Given that the heat was now reaching 31degsC, both sides maintained an impressive work rate in the second period which was a credit to Uckfield after they went five behind six minutes into the half when London curled a sumptuous shot into the top corner.

On the hour, Knight exercised a ‘96 Gascoigne goal, flicking the ball over the defender and finishing for number six.

A 25 yard drive from Rayner found the net, coming down from the underside of the crossbar for number seven after 73 minutes but great credit to Uckfield as they dug in and managed a consolation goal as the winger ran from inside his own half to finish well past the largely unemployed Matt Larkin.

The final whistle must have come as a great relief for both sides who had given their all in really uncomfortable conditions.