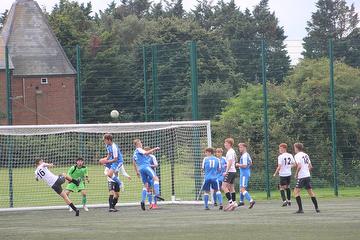 The Academy produced their best performance of pre-season to beat a Dover Athletic side for the very first time at Academy level.

Every player to a man put on a performance worthy of mention and they were thoroughly deserving of their fine victory.

After a relatively quiet opening 20 minutes, Tonbridge fashioned the first chance of the game when Luca Woodhouse’s effort was deflected for a corner, from which, Joe Tyrie’s diving header marginally cleared the bar.

But a minute later, the Angels were in front. A sharp interplay between Josh McArthur and Isaac Barden set up Woodhouse to fire low beyond the goalkeeper’s reach.

Buoyed by their goal, the Angels youngsters grew in confidence and, despite Nat Gibb making a 25th minute save, they dominated the game and created the best of the chances.

After 28 minutes, Billy Kent struck the crossbar and shot narrowly wide after 36 minutes whilst Barden and Leo Vowles both had shooting chances.

Dover improved after the break and had their best chance of the match after 55 minutes when, with time and space, a shot cleared the bar. But, for all their pressure, Gibb was only asked to make routine saves which he did with impeccable handling.

Just past the hour mark, substitute Cameron Wootton cut in from the right and curled a shot towards the top corner but the ball was clawed to safety with an agile save from the goalkeeper.

As the Angels started to tire, Dover made the running in the last 20 minutes but with Tyrie, Kian Austin and Shay Brennan defending resolutely the home side barely registered a shot with Gibb collecting every cross into his six yard box.

Three minutes remained when Barden waltzed into the box to draw a clumsy challenge leaving the referee little option but to point to the spot. Woodhouse calmly sent the goalkeeper to the right while rolling the ball in the opposite direction.

An excellent performance and result that left a feeling of optimism for the coming season.