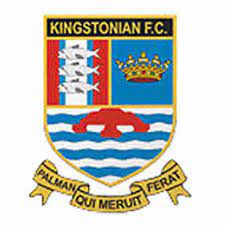 On Saturday 31st July we travel for a pre-season friendly to Kingstonian FC, something of a sleeping giant in the world of non-league football.  Founded in 1919 they became a hugely sucessful amateur outfit in the 1930's and 1960's but its arguably their more recent history that is even more striking.  Reaching the top flight of non-league football and winning two FA Trophys all around the turn of the century it seemed as if the new Millenium held an exciting future for the K's.

But the exceptional times didn't last on the pitch and off it coresponding financial challenges led them to have to vacate their fine Kingsmeadow ground now the home of Chelsea Ladies and for a time AFC Wimbledon.

That said it is perhaps possible that a gradual improvement is about to take place under the careful guidance of manager Hayden Bird.  They now groundshare at St Georges Field the home of Corinthian Casuals fc from where they will launch a project to bring the good times back once again.

Our last competitve meeting with the K's took place on Saturday 12th January in Isthmian Premier at home with Angels turning the form book upside down by taking all the points and ending Kingstonian's unbeaten run since early December. It ended 3-2 with Chinedu McKenzie getting a brace and Alex Read with the other strike.  It was to be the start of a good run of form for the Angels which of course ended with promotion to National South.  Earlier in the season we grabbed a 1-1 draw in the league at St Georges Field with an 87th minute equaliser scored by Liam King on 7th November.