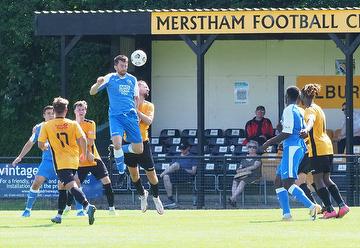 Angels continued their winning streak in the pre-season programme with a 2-1 success at Merstham of Isthmian Premier but at last their defensive wall was breached with a deserved strike for the hosts.

Manager, Steve McKimm contines to experiment with his positioning of players and that's exactly what pre-season is all about. We saw more central roles for Ricky Modeste and Joe Turner while Criag Braham-Barrett was used on the right flank in the second period.

The Moatsiders provided good opposition for the Kent side and were unlucky not to have perhaps got on the scoresheet before the break with a number of incisive raids on Jonny Henly's goal forcing the keeper to make a couple of good saves and on one occasion seeing the woodwork come to his rescue.

The visitors produced chances of their own most notably for Joe Turmer and Ibrahim Olutade with the flank play of Jerry O'Sullivan and Braham-Barrett posing plenty of questions for the Merstham defence.

The breakthrough for the Angels came in the 35th minute when a Tom Beere free kick struck the the crossbar and there was Aaron Smith-Joseph right place, right time to knock home the rebound.   It was at this time that the Angels started to show their National South credentials knocking the ball around beautifully and it was no great surprise when they doubled their lead in the 40th minute.  Tom Beere was fed from the left wing and proceeded to let fly with a gloroius shot which flew into the the net from quite a tight angle.

Merstham needed the half time whistle more than Tonbridge and at that stage it looked very comfortable for the visitors.

However, a dressing room re-shuffle seemed to energise the hosts and despite Braham-Barrett hitting the woodwork early on in the half, Merstham pulled a goal back on 58 minutes follwing good work on the left.  In fact within a minute of the restart they very nearly drew level but the ball rolled agonisingly along the goal with no one to poke it home. Thereafter it was very much an even affair with much of the play in midfield areas as both teams battled with the searing heat.  In the 65th minute Sonny Miles was just over with a header from a corner.  Trialist, Smith-Joseph, now playing wide produced a penetrating run in the 81st minute which might have made the last few minutes a little more comfortable for the visitors but the score was to remain at 2-1 to the Angels.

It will be interesting to see whether Smith-Joseph has done enough to convince the Tonbridge management to sign him on as McKimm has made it clear he does need another striker.

Afterwards the Angels Boss said: "We started well enough but then I thought our ball retention at times wasn't good enough. We obviously had a good spell just before half time and it was good to get another win from the point of view of momentum."