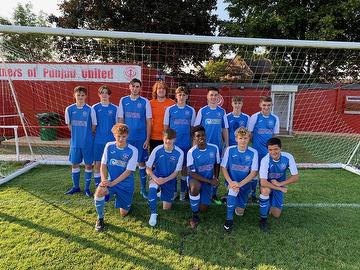 Tonbridge Angels will return to the Isthmian Youth League next season after a four year hiatus and Dominic Welsh has been busy putting together his squad via a series of trials and the visit to Punjab United offered a first viewing of his progress.

Ultimately, Tonbridge cruised to a comfortable victory with a team missing a few who might well feature prominently when the League season gets underway on the 23rd August

On a lovely pitch at Gravesend, the Angels opened the scoring within the first minute when Nathan Jeche finished cooly after being sent clear by Harry Sargent.

Matt Larkin, in the Tonbridge goal, made a fine save after seven minutes before his side made several chances to increase their lead including a cracking shot from Harry London that came down from the underside of the bar.

Punjab’s best player, their captain scored from the edge of the box to bring the home side level after a 21 minutes but it lasted barely a minute before a Billy Wright shot looped over a stranded goalkeeper.

Jeche brought the best out of the home goalkeeper with two excellent saves but he was helpless when a cross from the right offered Rockie Burke a tap-in for a 3-1 lead at the break.

Tonbridge largely controlled the game in the second period with Max Lambert testing the goalkeeper early in the half. Eventually, after 57 minutes, Jeche and Zach Stead combined for the latter to finish with a shot into the bottom corner.

Larkin had to be at his best to thwart the lively Punjab captain on three occasions but when the home side were awarded a penalty the skipper fluffed his lines with a spot kick that went high over the bar.

After 74 minutes, Punjab did bring the score back to 4-2 with a close range header but two goals in four minutes from Burke, completing his hat trick extinguished any thoughts of a comeback. Burke tapped in a London cross and finished a fine move involving Sargent and Cameron Howard.

The last kick of the match gave Jeche his second goal and the Angels seventh. Tougher tasks are ahead but the signs for the Isthmian League season are encouraging.