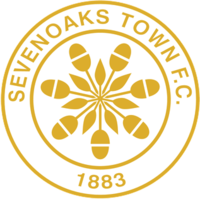 Angels travel to take on The Oaks

Sevenoaks FC was founded as long ago as 1883 with the club being renamed Sevenoaks Town in 1906 and appropriately playing in the Sevenoaks League.  In 1951 they joined the Kent Amateur League which eventually became the Kent County League.

After becoming champions in 2002/03 they stepped up into the Kent League now of course known as the Southern Counties East Football League (SCEFL) with Sevenoaks Town being transferred to the Premier Division 2013/14. In 2017/18 the club were SCEFL champions and were promoted to the Isthmian League South East Division (Step 2 of the English Non-League Pyramid) where they continue to compete.

Although the two clubs have played each other a number of times in pre-season friendlies due to their comparative proximity, the last competitive meeting, and indeed perhaps the only such meeting, took place on Tuesday 9th October 2018 in the 1st Round of the Isthmian League Cup when the Angels ran out winners with a fairly comfortable 3-0 scoreline.  Jack Richards (2) and Alex Reid provided the goals in front of 206 attendees.

Sevenoaks Town both on and off the pitch have seen a positive improvement to the club in recent years including installation of an artificial surface, and now have some exciting plans on the drawing board for the complete redevelopment of their Greatness Park ground.