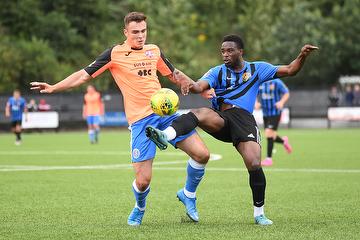 One defensive slip by the Angels in the 54th minute somewhat gifted what was to prove the winning goal for Sevenoaks with Louis Collins the grateful recipient.  A back header to Jonny Henly was misdirected and although the keeper still appeared favourite to gather, somehow Collins nipped in and fired home.

Overall it was a fairly even contest with perhaps, Sevenoaks the more physical and why not when local bragging rights are at stake and your opponents play their league football two levels higher.

Tommy Wood for the visitors should have done better in the 35th minute but just failed to convert a Tom Hanfrey cross and there followed a succession of Angels corners up until half time but their territorial dominance failed to produce goals.

Tonbridge improved in the second half with efforts from Wood and Joe Turner but either wide or straight at the home keeper. There followed that decisive goal for Sevenoaks although that only served to motivate the visitors and a series of efforts were repulsed by the home side the closest arguably being a shot from Ibrahim Olutade on 69 minutes that was cleared off the line.  The contest continued in much the same vein for the remainder of the match with Tonbridge huffing and puffing but not really giving the Sevenoaks defence too many genuine scares.

Credit Sevenoaks who for their part continued to make occasional raids into the visitors half in attempting to make the game safe.  They needn't have worried as it seemed that however long the match went on for, Angels simply were destined not to find the back of the net.   There are going to be toughter defensive units to breach in National South and so therefore lack of genuine goalscoring opportunities this evening would be a concern for Tonbridge boss Steve McKimm>

Afterwards, he said: "There are certain things I wasn't happy with tonight and other things I thought we did quite well.  It's still pre-season and we will work these things out and remedy them as we prepare for the start of the campaign on 14th August."