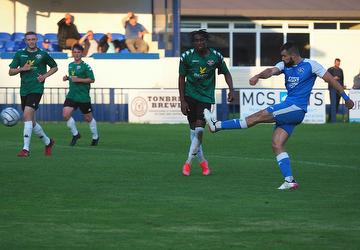 Tonbridge Angels maintained their 100% pre-season record in a feisty encounter with Lewes that, at times, defied the description of friendly. A single goal, a fine strike from Joe Turner on 31 minutes was ultimately the decider. The miserly Angels defence have yet to concede a goal in four pre-season games.

Steve McKimm was pleased with his side commenting after the match that “We played against a good footballing side, a more physical side. The boys stood up to it and we played some good stuff as well.”

Tonbridge made the running from the opening whistle forcing three corners that came to nothing before the first chance of the game saw ex-Angels stopper Lewis Carey make a good save from Turner who had been set up by Zak Guerfi.

Lewes forced Jonny Henly into his first save of the match before Guerfi picked up the first yellow card of the evening following a couple of clumsy challenges.

On 31 minutes, good work from Ricky Modeste found Turner on the left edge of the box from where he curled a sumptuous shot into the top corner.

A couple of further chances fell to the Angels before the break with Ibrahim Olutade unable to get the ball from under his feet to create a meaningful shot and Tom Parkinson heading wide.

On 56 minutes a poor challenge on Turner brought a reaction from the Tonbridge man and following a scuffle involving several players, Turner collected a yellow card and the Lewes player that committed the original foul was sent off.

The game continued with its state of irritation and Modeste picked up a yellow card.

Luca Woodhouse, a second half substitute, sent in a teasing cross that narrowly evaded everyone in the box and with 20 minutes to go, the Angels triumvirate of 16 year-olds joined the fray. One of those youngsters, Bobby Moore, created two fine openings in the closing minutes for Joe Turner, the first being well saved by the substitute Lewes goalkeeper and from the second he struck the left hand post.

Woodhouse had one final chance that he sliced wide as the Angels saw the game out for a deserved victory.

Pre-season continues on Saturday with an away game at Merstham, Kick Off 3:00pm.

Picture: Joe Turner fires in the only goal of the game