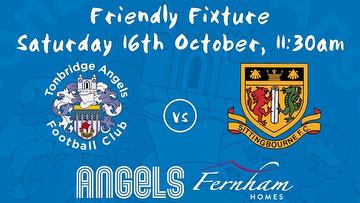 Good work out for Angels in Brickies Friendly

With no 1st team competitive football for three weeks, Angels manager Steve McKimm needed to get his players the opportunity of some game time as opposed to just training sessions, and so a friendly was arranged with Sittingbourne (Step 4 in the non-league pyramid) ) who themselves were without a fixture.

Angels managers and coaches will be reasonably pleased with what they witnessed with the home side dominant throughout the majority of the 90 minutes and the ball spending much of the time in the Brickies half.  Perhaps the only disappointing aspect for Tonbridge was that more goals weren't score such was their superiority but this was partly down to a superb performance by Joe Doherty in the Sittingbourne goal.

The three Angels youth players who featured certainly did their credentials no harm and didn't look out of place in a 'men's footballing' environment while two trialists for the hosts , Anis and Peter Gregory both put themselves about.

The game itself was largely a procession of Angels chances and half chances but in the end it came down to goals from Sonny Miles (7') Tommy Parkinson assist, Aaron Smith-Joseph 29' Ibrahim Olutade assist, and an Own Goal on 79'.

After the game, Assistant Manager, Barry Moore was tight lipped about signings in time for next Saturday's National South fixture at Billericay Town so we will have to wait and see whether the two trialists have done enough or is McKimm looking elsewhere.

With all due respect to Sittingbourne, and we thank them for coming over to Longmead for this fixture, the fact is sterner tests await the Angels at New Lodge next Saturday where the home side will have the recently installed manager, Jody Brown in the dugout.