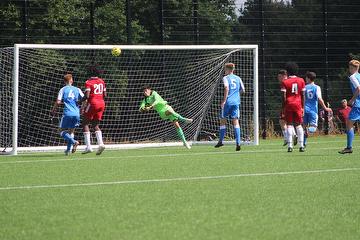 Report and picture by Wink Tomkinson

The Academy signed off their pre-season with a goal-packed encounter against Welling United, full of thrills, spills and some cracking strikes.

They will take their shooting boots into Tuesday evening’s FA Youth Cup tie at Folkestone Invicta but, just by the scoreline alone, the need will be to tighten up defensively.

On a warm lunchtime at Sidcup, Tonbridge started the brighter and opened the scoring after nine minutes when excellent link-up play between Luca Woodhouse and Fin Hartley opened up the opportunity for Cameron Wootton to sweep the ball into the bottom corner. Wootton, who has waited a while for a goal, surged in confidence and tested the Welling goalkeeper twice in the next couple of minutes.

On 17 minutes, the Angels went two goals up when Fin Hartley produced a great strike into the top corner after a free kick had only been partially cleared to his feet.

There was no time to rest on their lead as within three minutes Welling were back level. After losing the ball in midfield, a Welling player strode forward a couple of paces and unleashed a shot that cannoned in off the underside of the bar. Four minutes later they produced another cracker with a curler past Nat Gibb and into the top corner.

The game continued to rain goals when Tonbridge regained the lead following a cheeky lobbed pass from Woodhouse for Ben Hermitage to finish after 27 minutes. They restored their original two goal advantage on 34 minutes when Hartley set up Wootton to shoot across the face of the goalkeeper and into the far corner.

Tonbridge retained their 4-2 lead at the break but only by virtue of a superb double save from Gibb.

Good saves and wasteful finishing from both sides left the second half surprisingly goalless for the first quarter hour but then the goalfest picked up pace once more as Welling once more scored two goals in quick time to get back to level terms. The first came with a shot from all of 35 yards that went in off the underside of the bar and two minutes later were level with a well worked goal.

For the first time in the match, Welling looked the better side but with 11 minutes to go, it was the Angels who regained the lead with another fine strike this time from 20 yards by Harry London.

Tonbridge finished the match the stronger and into injury time London was on hand to collect the rebound after Will Saunders header had been well saved.

Amazingly there was still time for one more goal when, after six minutes of added time, the referee, who had been excellent, pointed to the spot for Welling to bring the final score to 5-6.

As previously stated, the Angels begin their FA Youth Cup campaign on Tuesday evening at Folkestone with a 7.30 pm kick off and the lads will be appreciative of your support.