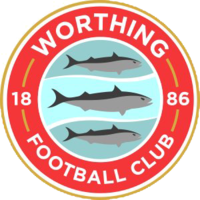 Tomorrow (Saturday 24th July) the Angels make the trip to the Sussex Coast to visit Isthmian Premier Worthing FC which certainly on paper looks to be the toughest of the pre-season friendlies so far.  They may play a step lower in the pyramid than Tonbridge but their performances over the last two seasons suggest that, but for the pandemic, they would be gracing National South alongside their visitors.

The suspension of the last two campaigns at Isthmian Premier level certainly cost Worthing dear and they will be wanting to make up for lost time with what will surely be a very strong squad.

Our last competitive meetings with the Rebels took place during our promotion winning season 2018/19.   On 8th December during a slump in form for the Angels, we succumbed to a 2-1 home loss despite taking the lead in the 43rd minute through Joe Turner.  A controversial sending off of James Folkes for hand ball during the second period put the hosts under pressure and eventually Worthing were able to leave Longmead with all the points.

The return league fixture very much at the business end of the season with both sides attempting to stake their claim in the playoffs, saw a 1-1 draw in a pulsating game with once again Joe Turner the scorer for the visitors.   Angels will have been slightly the happier with a point gained while Worthing arguably saw two points slip away and that feeling was justified with Tonbridge joining the end of season party and Worthing just missing out.

Founded in 1886, the early Noughties of this century found Worthing playing in Isthmian Premier but they were to be relegated to Isthmian South in 2006/07. The club had to wait until 2015/16 to regain their Premier status but with the installation of a 3G pitch and various other ground improvements they now have a substantial supporter base witness the 1,322 that turned up at the Angels last visit to Woodside Road.