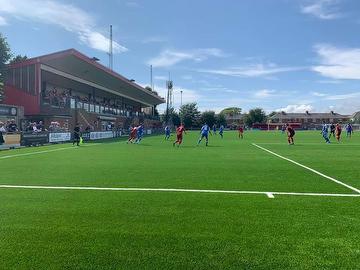 Angels all at Sea

Angels were given a footballing lesson by surely one of the favourites this season for promotion to National South, Worthing.

There was a rather tentative opening as both sides attempted to get the feel and pace of the game. Worthing were playing their possession football but not in an area that was hurting the Angels. Eventually after 8 minutes a cross from Worthing’s left provided the first genuine opening but the the ball was cleared for a corner.

On 16 minutes a handball by Harry Hudson which arose from a miscommunication with his keeper Jonny Henly resulted in a penalty to Worthing duly struck home by Ollie Pearce in the 17th minute. The Rebels almost doubled their advantage a minute later but Ricky Modeste was on hand to make the goal line clearance.

By now Worthing were well in their stride and had a couple of chances with No 9 in particular keeping the Angels defence guessing with a decent shot that took a deflection and then Myles-Meekums forced a competent stop from Henly.

It took until the 27th minute for Angels to seriously threaten Worthing's goal when Doug Loft with a shot from outside the area tested the alertness of Harrison Male.

A peach of a pass on the 34th minute that put in Worthing no 9 unmarked but his header was straight at Henly.

Worthing should have been two up on 38 minutes when a move down the right resulted a header just over the bar with the Angels defence out of position.

On the stroke of half time a rush of blood to the head by goalkeeper Male who came out his goal to claim a ball he was never going to get was subequently rounded by Hanfrey who passed to Tommy Wood and the striker placed the ball into an unguarded. In truth it was something of a surprise lifeline for Tonbridge.

All over the pitch Angels were now starting to wilt and on 55 minutes the culprit this time was O’Sullvan with a blatant trip in the area. Ollie Pearce again took responsibility and Worthing were 4-1 to the good.

At this point Angels seemed to suddenly remember they are a National South side and started at last to gain some decent possession in the Worthing half and forced a couple of decent strips out of Male. The half time introduction of Zak Guerfi had made a difference.

As the half proceeded some of the sting had gone out of the game, Worthing were comfortably 3 goals to the good and Angels just couldn’t find a way through the efficient Rebels defence. To be fair Worthing always looked the likelier to add to the scoreline but 4-1 to the home side was how it stayed.

Much work to be done on the training ground and in the last three pre-season friendlies for Steve McKimm’s men to concentrate on.  Perhaps it should be remembered that three senior players were missing today, Arthur Lee, Tommy Parkinson and Joe Turner but it was alarming how Worthing appeared superior in every department.

It is often said that managers learn more from defeats that victories.  McKimm semed to adhere to this theory when afterwrds he said: "We learned bundles today.  We were taught a lesson in certain areas, Worthing were very good, we knew they were going to be but it was intersting for me."